Rent The Blind Dead Collection: Night of the Seagulls (1975) 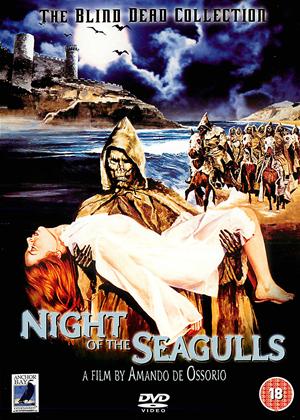 Synopsis:
The classic saga of The Blind Dead ends with this creepy tale of a remote coastal town where frightened villagers must sacrifice beautiful virgins to the blood cult of the Knights Templar. For seven nights every seven years, these eyeless zombies rise from the sea to feast on human flesh as the souls of the damned are trapped in the screams of gulls. In this final unforgettable shocker, the mood is darker, the fear is stronger and the hunger of the Templar more ferocious than ever before!
Actors:
Víctor Petit, María Kosty, Sandra Mozarowsky, José Antonio Calvo, Julia Saly, Javier de Rivera, Pilar Vela, Fernando Villena, María Vidal, Oscar Phens, Susana Estrada, Luis Ciges
Directors:
Amando de Ossorio
Writers:
Amando de Ossorio
Studio:
Anchor Bay
Genres:
Horror
Countries:
Spain, Horror

Rent other films like The Blind Dead Collection: Night of the Seagulls

Reviews (1) of The Blind Dead Collection: Night of the Seagulls

Spoilers follow ... - The Blind Dead Collection: Night of the Seagulls review by NP

This proved to be the last in Spanish Director Amando de Ossorio's four-part Blind Dead series.

The set-up is far less contrived than in the previous ‘Ghost Galleon’ (1974); instead of an ill-advised publicity stunt gone wrong, here we have the simple premise of a Doctor (Stein, no less, played by Victor Petit) and his wife (Maria Kosty) moving to an isolated fishing village. Although, why he insists on staying here to take up his post when everyone is either openly hostile, or completely ignores him, is typically baffling. And yet, without such wilfulness, where would horror plots be?

Only local Lucy (Sandra Mozarosky, who tragically died not long after filming was completed at the age of 18) and José Antonio Calvo’s village idiot Teddy show any friendship towards the couple.

There is no denying Ossorio’s skill at evoking a creepy atmosphere. Many familiar staples are here – misty graveyards, creaking doors, wonderfully isolated locations and decaying-looking sets. Every effort seems to have been made to make the seaport a closed, sinister, uninviting place. And pretty soon, the Knights Templar are emerging from their foul tombs with agonising slowness, their spindly clawed hands looking as if they could barely give you a tame stroke without turning to dust (perhaps it would have been better to dress the actors’ hands, rather than provide separate twig-like appendages).

The slow build-up to Lucy’s final scene on the beach is excellent, very Jean Rollin-esque. Knowing what is going to happen to her doesn’t make us optimistic of a less than grisly outcome. The ever-present shrieking birds from the title have a part to play too – according to Teddy, the pretty girls taken to sacrifice ‘become the seagulls,’ which is creepily enigmatic.

Other than a fairly standard ending, this doesn’t necessarily feel like final closure for these withered knights. The series could have continued. Perhaps it still might; there is plenty of mileage left in these memorably ethereal creatures.