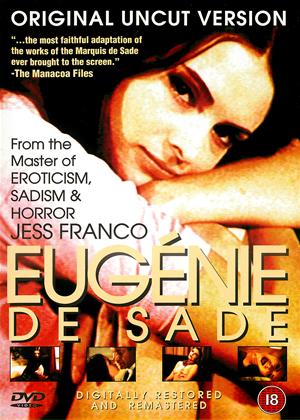 Is ‘Eugenie de Sade’ simply an excuse for Spanish Director Jess Franco to film as many shots of Soledad Miranda’s semi-naked body as possible? What do you reckon? Did he even need an excuse? Whether curled up in front of the fire, walking through the snow in a large hat and leather coat or sprawled out on the bed, Miranda (who plays Eugenie) is a true presence. Not just because she is stunningly beautiful. She exudes more than that. The fashions from Franco’s projects from this period (or many projects from this period) often strip anyone of dignity or appeal, but Soledad somehow rises above the red leather boots and the outsized shades etc, remaining captivating throughout. And mainly, as is proved here several times, she was a terrific, uninhibited actress.

Here Eugenie recounts the film’s story whilst lying broken in a hospital bed – horribly pertinent since Soledad was dead by the time of the film’s release. She relays her story to writer Atilla Tanner (Franco), who wishes to write a book about her father Albert’s life. He shadows her throughout the story, not condoning nor condemning her actions.

One such moment involves inviting a blonde Austrian hitch-hiker back to the family home, where a drunken evening brings on a selection of increasingly uncomfortable ‘games’. There is a definite sense of dread, because we are sure the girl will be murdered – but what form it will take isn’t revealed for a while, until things have become progressively perverse. All of this fuels their desire for one another.

One thing that separates this from many Franco films that are usually bathed in searing sunshine and exotic locales, is that this is set during the winter, and a pretty heavy one at that. It adds an extra element to the bleak unreachable debauchery of the father and daughter’s murderous escapades in what is often a three-hander: Miranda, Muller and Franco.

Only the ending lets things down a little. Low-key is one way of putting it. Like other such films, it doesn’t end, it just sort of stops, with (in this case) Franco as the last performer we see – and for all his skills as a director, his acting pales in comparison to everyone else on screen. A beautiful film, though, and probably the best showcase of Soledad Miranda’s talent.