Rent Twice Round the Daffodils (1962) 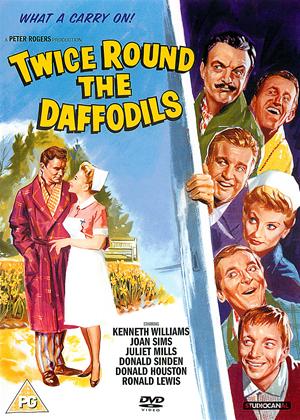 Reviews (2) of Twice Round the Daffodils

Once Is More Than Enough. - Twice Round the Daffodils review by NC

It actually starts off quite well. A group of disparate men are thrown together in a T.B. ward, with no escape until they can walk twice around the daffodil garden. There's Kenneth Williams, slightly more subdued than his frenetic Carry On roles, chess-obsessed but with no-one to play with, eager for letters and visits from his sister (Joan Sims) whilst making out he couldn't care less. There's Ronald Lewis, in love with his childhood sweetheart, whilst her feelings for him have cooled, but she lacks the courage to tell him so. There's Donald Sinden, playing the part he's played a hundred times. Lance Percival isn't really given much of a character - he seems to be there to make the numbers up, and for others to use him as a sounding board. There's Andrew Ray, weak, sickly, lonely, shy. The most interesting character is Donald Houston's Welsh miner, with archaic convictions of what a man should be, refusing to countenance his illness, and constantly goading Andrew Ray's 'lack of masculinity'. Juliet Mills is an impossible angel, never off duty, always saying exactly the right thing - and did nurses ever wear high heels?

It could have been a nice little film, with the varying personalities meeting and colliding in an inescapable space, and to begin with that is what happens to a mildly competent extent. But then about half-way through, for some reason, the interesting issues are either resolved or put on the back burner, and the film becomes one of those boring, predictable British comedies about stuttering romances, (between patients and nurses), along with sexist scenes involving Jill Ireland.

Gerald Thomas and the scriptwriters manage to turn a pleasant bed of flowers into a bit of a midden.

Very Dated Comedy/Drama - Twice Round the Daffodils review by GI

A British comedy that has the hallmarks of the early Carry Ons, indeed it's based on the same play as Carry On Nurse (1959), directed and produced by the same team and features some Carry On stalwarts such as Kenneth Williams and Joan Sims, but this doesn't seem to have been as fondly remembered. Possibly the reason is the entire set up is a somewhat dated one. Set in a TB sanatorium at a time when the only cure was rest and fresh air this is the trials, tribulations and love lives of six men of various personalities who inhabit one ward ruled over by a sexy and benevolent nurse (Juliet Mills). There is more of drama than comedy here and in that sense the film is of interest but much of the comedy is very dated and features a cultural misogyny that will jar with modern audiences, e.g. the female characters succumb to unsolicited embraces and kisses as if this is what every woman does! Overall it's about lives lost and found in a hospital ward and at times the script struggles trying to make jokes where there are none to be made. Patients hiding in cupboards from a tyrannical matron etc etc. Established stars like Williams aren't given the room to shine here although, interestingly, he enjoyed making this film because there's less comedy. For lovers of British comedy from this period this may still hold some treasure but it's a poor relation to the Carry On series.