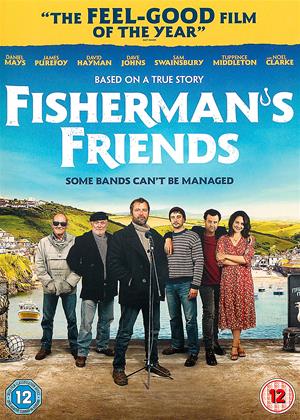 Despite some less than enthusiastic reviews in the media, this was a wonderful and charming little film, based on a true story. It may have been a bit formulaic and predictable, it was no less enjoyable for that.  The music and the gentle humour was outstanding and the acting excellent.

Might have been based on an interesting story but this film is so full of cliches it was painful to watch.

A very entertaining story of a bunch of ordinary Cornish shanty singers brought to life in a tongue in cheek telling of their discovery. This is one film where the locations can easily be visited, from Port Isaac village to St, James the Great Church St. Kew. There's even a cameo appearance by celebrity chef Nathan Outlaw who has a restaurant in the village. probably not one for the Oscars but super performances by the whole cast, you can even play "spot the original fishermen's friends" who appear in the film.

A well told if rather quaint story.

especially if you are down with a heavy cold, feeling lousy, this is the film to make you forget your troubles, and go with the flow.

Amusing at times and touching on social issues in others, quite refreshing to watch during a 'chiil out'.

Not a Bad Catch - Fisherman's Friends review by BG

There are similar themes lurking here in films like The Full Monty, Calendar Girls, and Brassed Off; a small group of British people who have certain problems and are determined to rise above it all and finally get media attention through talent and a lot of luck. Despite the unlikely premise that fishermen can score a big hit with Sea-Shanties, and the familiarity and predictability, this is still a feelgood film. I liked the main characters, and there's a good dig at astronomical London food and drink prices. £53 for a round in a pub!?... There's also a sly poke at the music industry. This is an unpretentious "Boy Band", who put their job first, and don't need fancy cars and toys.... Just a drink and a sing-song at their local.

One of those 'Ye Old England' meets the modern world. The Cornish characters reminded me of the Yorkshire Moors men in the pub during opening scenes of American Werewolf in London. Naturally old world charm disarms the city slickers from a record company who kid one of their own whilst driving around Cornwall that they would like to sign a bunch of local fishermen to make an album.

Left to his own devices muggins attempts to sign them up whilst ogling the daughter of one of them (Tuppence Middleton; yes please!).

So, romance, humour and pathos. An OK movie best consumed with a few beers/gins to lower your cliché monitor. Safe to watch with partner and probably best bet!

Now I like a corny feel good film as well as the next person, but this was just dreadful. Cringeworthy, predictable, badly acted and frankly quite unwatchable. It may have turned around in the last fifteen minutes but frankly I could bear it no longer. It made me feel very bad and not good at all - on any level.

This film lifted my spirits so its worth 5 stars for that!- it's feel good and quirky and, as  another reviewer noted, it may be rather formulaic and predictable,  but its none the less enjoyable!

A cliched, formulaic, peril-free Sunday afternoon film. Not as good as others of it’s ilk,  but Daniel Mays and James Purefoy are enjoyable. If you’re in the mood for this type of thing sit back and enjoy.

The story on which this is based is dramatic enough to make a great film. Instead it has just been used as an excuse for a rom com, only very loosely related to the true story, of little originality with a startling mismatch between the two leads. A fatal problem for a rom com!