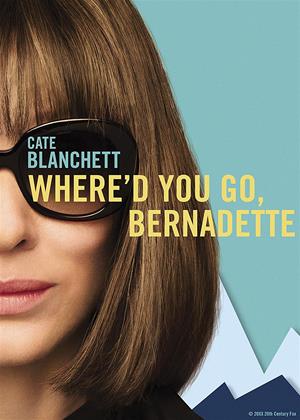 Not released
A Deadly Adoption

Not released
Amira and Sam

Not released
The Bronze

Not released
Youth in Oregon

Reviews of Where'd You Go, Bernadette

After having left the theater, I spoke with a fellow critic about the book the film Where’d You Go Bernadette was based on and how it differed. My colleague had informed me that the book was different in perspective as it followed more of a mysterious angle where a daughter searches for her escaping mother. Linklater’s direction of this story instead favors a film that gives the mom just as much time as the daughter and I’m all the more thankful for this inclusion. Cate Blanchett really is the glue that holds together this compelling bit of drama from bordering on light and mindless with its somewhat soapy structure.

Blanchett plays Bernadette Fox as a character we really do want to know more about. Over the course of her somewhat odd day-to-day life, we get to learn a little more about her lifestyle. She was once an architect but left that life behind to live in a house that is clearly an aged dump, more shabby shack than shabby chic. She is divorced but has a daughter who admires her greatly and loves residing in her rusty home while attending school. Anytime her past comes up, be it in conversation or even just Googling documentaries about her life, she’ll shut it down quickly with some other distraction. It becomes pretty apparent as her troubles progress that Bernadette needs help, in one form or another.

Linklater stages this kind of drama with a certain sentimentality that seems somewhat uncommon. It’s certainly not his usual style given how his story isn’t as meandering and keeps the characters on a rather strict heartfelt track. There’s plenty of messy and slapstick moments present that seem more akin to a family movie, including scenes of mud sliding into a home to ruining a school function and Bernadette trying to free her dog from a room with a rusty door. There’s an absurdity in how Bernadette’s mismanagement leads to a wild involvement with the FBI. Bernadette’s slowly revealed history showcases a tragic past that she has to get over. In any other hands, the film could’ve been a light bit of Lifetime sentimentality.

But Linklater knows that the biggest gun in this arsenal is Blanchett and he blasts her acting with a number of fantastic scenes. We get to progressively dig deep into the character so that we see more to her than just the mystery of escaping. We want to escape with her the more we know about her, even if we feel sorry for her situation and believe she needs help. What helps make her more relatable is that Bernadette is not seeking to get away from it all but find a place where she belongs. She wants to work and on something new but also within a confined setting outside of normal social circles.

Where’d You Go, Bernadette certainly has that soapy quality of dramas more whimsical than grounded but Linklater and Blanchett do a great job scrubbing off most of the suds. It's a flawed but likable film if only to watch Cate dominate the screen with a masterful performance too good for this kind of material.