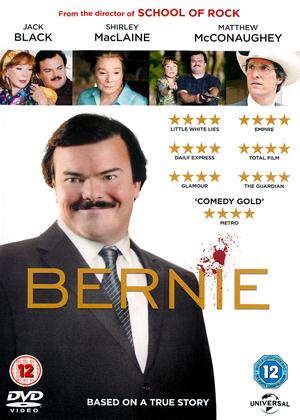 I didn't know what to expect from this movie - esp as I only sometimes like Jack Black (sometimes he is over te top). But in this movie he is perfect.

This is part drama and part mockumentary about a funeral director's assistant who ingratiates himself with a much-hated local widow, only for it all to end in disaster.

Really funny - and I mean laugh out loud funny - clips from mock interviews with townsfolk, add to the charm of this slight but excellent film. It has no need to be longer than 30 minutes either. This movie will never win Oscars (comedies never do anyway) but for a great fun film where the copious laughs come from a deep foundation of sadness (as all good comedy does) I am prepared to give this top marks.

This is a thought-provoking film and one I won't forget - and the initial demonstration of how to prepare a corpse is so very funny and true (the Americans really do conduct funeral care like that).

And it's based on a true story (how much we do not know) - watch through the final credits to see more mock interviews and footage of the real Bernie and photos of him with the widow.

Too much - Bernie review by JD

Jack Black's sickly sweet role and Shirley MacLaine's vitriolic nasty role are too much. It was quite funny in places but most of the time it is an awkward humour. I know this is alot of people's taste but I did not enjoy most of it. Sometimes the timing and rhythm are right but there is a fine line in humour and for me the wrong side.

Jack Black isn’t a name that goes with serious dramas, with his star rating being elevated by movies like Tropic Thunder, a film that finds his running around half naked chasing after a literal mountain of heroin, body checking small children as he goes. However Bernie plays right into Black’s wheelhouse depicting a genuinely lovable saint of a man whose only real mistake is that he cannot respond to criticism, even undue criticism.

Bernie follows the small town life of Bernie (Jack Black), a funeral director who meets Marjorie (Shirley MacLaine), an elderly woman hated within the small town community but someone who Bernie comes to admire and even love. When she suddenly changes and starts manipulating and degrading him Bernie finds himself on a path that will find him in all sorts of trouble, trouble he never would have imagined

Directed by Richard Linklater, the creator of the Before trilogy, comes a tale of manipulation, be it Bernie’s subtle manipulation of his customers, Marjorie’s control of Bernie through intimidation and bullying or DA Danny Buck’s (Matthew McConaughey) influence over the hearts and minds of the public and the people of Carthage, the small town ripped apart by this depraved and all around odd true story.

Black nails the sickly sweet nature of Bernie making him a wonderfully vivid character, a pure soul chipped away at over time, one who does bad things but retains the faith that pushed him to become the man he was in the first place. MacLaine works well with Black as the reprehensible Marjorie but her character lacks reason or logic, she does things for the sake of the story, odd when it seems everyone in the town of Carthage has an opinion of her. Her motivations for transforming into Cruella DeVille are unclear, her actions nonsensical and her all around demeanour proving a sticking point for this delicious tale.

While watching Bernie deal with his own personal trials and tribulations and the events he caused the film is confusing and lacks an ending, it just concludes with the idea that Bernie at heart was a good person, a man darkened by Marjorie, a woman who will always remain an enigma thanks to some unwelcome and poor characterisation