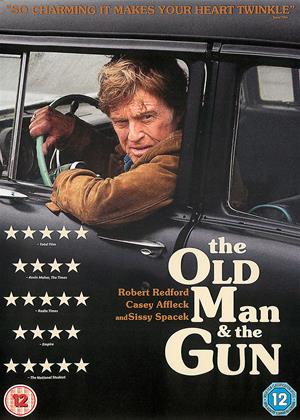 Rent other films like The Old Man and the Gun

Reviews (5) of The Old Man and the Gun

Full disclosure - I've got a dog in this fight. I'm an old man, and old gimmer, my fully beard is white, mostly I'm soft and podgy and I am just plain slow nowadays. The Old Man and the Gun is beautiful crime story for me, and people like me. It's how I'd rob a bank.

Robert Redford now craggier and maybe not as easy on the eye as he used to be is still a fine screen presence and team him up with veterans who know their game, Sissy Spacek, Danny Glover and Tom Waits, and throw in a young buck at the top of his, Casey Affleck, and no matter how slow-burning the story is or how unbelievable, even though it is mainly a true story, and you are going to get more good than bad.

Detractors will say the story is slow, there is 'no action' and there's a lot of sitting around and talking, well I would have to say that's the point. This is older people and specifically an older man who does not believe in violence but patience and charm to get his way. It is a slow easy conversation with a cup of coffee of a film. Sunday afternoon easiness made as a story and sometimes we are all better for watching such a story. It cannot always be evil murderers, exploding helicopters and two hours of shoot-outs.

The whole film has a relaxing feel to it and this comes through in Redford's easy charm and portrayal of Tucker. His chemistry and playful sparring with Spacek, the core to the story, is believable and enjoyable, likewise his love and friendship with partners in crime, Waits and Glover, who shine in lesser supporting roles feels authentic. Not as easy to do as many a film has proved.

Affleck as the man looking for a spark in his career John Hunt gets obsessed with the robbers gives a great 'everyman' display and his loving family life is truthful and not realistic, little touches like this make The Old Man and his Gun a slow-burning success. With the running time and barely over 90 minutes the time flew by.

With enjoyable and likeable characters on the screen for nearly all of the running time Robert Redford has certainly chosen a great film to go out on, if indeed this is his swansong, maybe not a spectacular and certainly divisive one would imagine, slow languid films are not everyone's cup of tea, but it cannot be denied at 80 years of age he is still an engaging film presence.

The locations are on the nose mid-west America and generally seem to be period-correct, although I'm no expert on 80s USA, the story and cinematography are straight forward and uncomplex, but this is the strength of the film.

An uncomplicated, mainly true, grey-bank-robber story, if you want a nice relaxing gentle time, I would recommend The Old Man and the Gun, in fact, I just recommend it anyway.

Don't miss this one! - The Old Man and the Gun review by BM

Gentle and delightful with Robert Redford at the top of his game, supported by the excellent Sissy Spacek. Thee fact that Elizabeth Moss makes what is almost a cameo appearance tells you what a classy  production this is! No violence, no stunts and a sublime jazz infused soundtrack.And any film which uses "Blues Run the Game" by Jackson C Frank gets my vote!! Superb!

Very Watchable - The Old Man and the Gun review by IG

Filmed through rose-tinted glasses, but, none the worse for that, very entertaining and enjoyable to watch, Robert Redford delivers a strong performance.

As other reviewers have indicated, not a shoot-em-up, explosive-ridden, chase, but a slow-moving, watchable, feel-good film with good acting, a plausible storyline ('mostly true') but some strands left unanswered.

Undemanding - The Old Man and the Gun review by KF

The film trundles along one directionally and soon becomes repetitive. The dialogue is amiable enough without ever being sharp or witty. Likely to have appeal for an older generation I think.

If this were to be Robert Redford’s final film, it’d certainly be a strong note to go out on. He plays the aged criminal of the 1980s by the name of Forrest Tucker. He robbed banks but always seemed to do so with a friendly nature, even for a man wielding a gun. There’s a brilliant moment as he quietly tries to get a teller to fill a bag with money and she starts crying. Forrest knows this is her first time being robbed and gently tells her not to be upset, that she’s doing a great job at cooperating with his demands. He leaves her with a smile and mixed emotions as an old man robbed her with warm sincerity.

There are a number of ways this kind of story could be approached. We could approach it comically with Redford dashing around cops and as the committed cop, John Hunt (Casey Affleck) struggles to catch him. We could treat it like a tense crime drama of the robberies being more of a serious issue with an unserious man. But director David Lowery finds something more here. He tries to decipher Tucker with more of an understanding nature for an old man with a gun and a knack for robberies. And for what could’ve been a series of goofy heists, there’s humanity and warmth throughout.

It helps that Tucker has a companion he can bounce his thought off of in the form of Jewel (Sissy Spacek). The two hook up at a diner and it isn’t long before Tucker has impressed her with his decades of knowledge in how to pull of a bank heist. She’s impressed not just by his criminal smarts but also by the ease of which he speaks about such situations. To him, going to rob a bank is the same as going to make a withdrawal. In fact, he does during business hours when many would assume that’s exactly what he’s doing.

But there’s more. During a quiet moment in the country, Redford and Spacek have a heart-to-heart chat about their philosophies on life. Redford essentially gives the old line about life being too short when in your twilight years but here it comes from a place of knowing. He speaks how with age comes a sense of distorted perceptions where lines of law and capitalism seem to blur in the grand scheme of things. He’s touching on something that’s hard to explain but perhaps a sensation that is easier to understand as life nears its end.

At the same time, we also get to know John Hunt as more than just the guy chasing Tucker. He’s a father and works exceptionally hard on a case that is tough to crack. It’s especially disconcerting that early in the film he has a momentary encounter with Tucker and didn’t spot him, a scene that no doubt lingers in his mind. They’ll meet again but with empathy between them before the inevitable chase and capture.

Even when loaded with sincerity, The Old Man with the Gun never goes for easy scenes as always feels human. During a getaway, Tucker at one point politely forces a woman to drive him away from the cops. She does so but under stress where she begs to spare her life and her son’s in the backseat. Not devoid of feeling, Tucker kindly asks them to find a spot to pull over and call for help so he drive off with their car. Another great moment has Tucker’s elderly cohorts lamenting on how they can’t keep doing these two-bit jobs for much longer at their age. All of these scenes best showcase how Tucker is aware that his era is drawing to a close and accepts his fate with a smile.