Rent A Beautiful Day in the Neighborhood (2019) 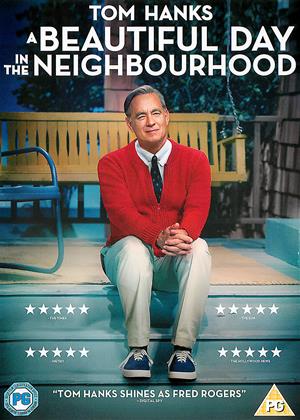 Rent other films like A Beautiful Day in the Neighborhood

Reviews (3) of A Beautiful Day in the Neighborhood

Mmm - I tried very hard to like this one - one of those that attempts to deal with some serious themes (loss, grief, desire for familial connection etc) by being self-consciously 'charming', but for me I'm afraid pretty much everything, whether script, or production, or acting, all fell a bit flat. The self-mocking styling of the film (a promising construct) stands awkwardly, separately, from the dialogue, which is realistic by comparison, but this, which includes an abundance of soap-opera style cliche, only serves to distract the audience from what's going on rather than reinforce any emotive power the film might have (although to be fair there are some very good moments en route when the syrupy strings get put away and the characters engage with their respective pasts). Meanwhile, the performances just seem to lack depth and nuance to me, and add to all this an American-style saturation of sentiment throughout, I'm coming away thinking this one ends up not saying very much, sadly.

Wet, sloppy and sentimental - A Beautiful Day in the Neighborhood review by PW

I think only the USA could produce a film so wet, sloppy and sentimental as this.

The only people I can imagine liking this are Infant school age children, and the very old who have become extremely sentimental. Or maybe perhaps somebody who has been infantilised by too much bad television.

I got his film largely because I like Tom Hanks, but the character he played was so wet, sloppy and condesending with a silly little voice, that after half an hour I would have liked to have seen him stuffed and mounted! The "plot" was totally simplistic and predictable.

An interesting, but unsuccessful, portrait of a US icon - A Beautiful Day in the Neighborhood review by JB

A Beautiful Day in the Neighborhood tackles US children's entertainment icon Mr Rogers, whose sensibility could not be more spectacularly unBritish.

Frank Rogers perpetrates an aggressive kindness (a phrase Tom Hanks, who plays him here, has mentioned in interviews). Rogers talks on his TV show about expressing and talking about feelings, and almost paradoxically locks in on whoever he speaks with, with laser like focus. That attitude is itself interrogated in detail by Lloyd (Matthew Rhys), a reporter from Esquire magazine - a fictional character for the purposes of this movie. Lloyd is sent to Pittsburgh to write just a 400 'puff piece' on Rogers which precipitates an unravelling of Lloyd's own attitudes towards kindness, family, relationships and love.

I'm not convinced this movie finds a way to dramatise the unique Mr Rogers for anyone unfamiliar with him, but it gives it an interesting try. To capture that weird mixture of psychological insight and the childlike that Rogers portrays, there are various movie-within-a-movie moments: from the opening titles with its arts and crafts mockup of a cityscape, to a sequence where Lloyd finds himself shrunk down as a puppet in the set of the TV show. It's all a bit Michel Gondry, just not as consistently used or developed as something like Eternal Sunshine of a Spotless Mind. That's all juxtaposed with almost melodramatic sequences of father-son conflict (between Rhys and an excellent Chris Cooper) and the trials of becoming new parents (between Rhys and an underused Susan Kelechi Watson as his wife, Andrea).

I'd have preferred a more gutsy commitment to the movie-within-the-movie moments and less of the melodrama, which is pretty ordinary and does suck the movie down into a beige schmaltz. Those sequences only work as well as they do because of the performances. Tom Hanks is excellent and Matthew Rhys is always very watchable.

Maybe it's because I'm too British (although I do have a soft spot for a romcom), but I found A Beautiful Day in the Neighborhood succumbs to the worst excesses of Mr Rogers without lifting the lid enough on his contradictions.

A Beautiful Day in the Neighborhood isn’t so much the Fred Rogers biopic as it is an adult version of Mister Rogers’ Neighborhood. When I say adult, I don’t mean that it features more adult situations, though I’d certainly not recommend it for children. Many of the same lessons that Rogers taught us on television still fit within the lives of an adult as they did a learning child. Learning about simple things of words and numbers are lessons best suited for kids. Rogers’ teachings of kindness and honesty crossed generations.

This is what makes such a film resonate best with an audience who grew up watching the TV neighbor. He has a way of tapping into our feelings and finding warmth. When Tom Hanks first pops up on the screen as Rogers, that tearfully joyous sensation washed over me once more. The thought of someone being as gentle and charming with talking about anything is an indescribable sense of tenderness.

In this episode, as it were, Rogers wants to talk to us all about forgiveness. He introduces us to Lloyd (Matthew Rhys), a cynical journalist who isn’t happy with himself or his life. His home life seems distant as he’s unsure how to approach his wife (Susan Kelechi Watson) or his newborn child. His relationship with his father (Chris Cooper) has strained to the point where he wants to force his dad out of his life. And at this point in his life, he’s not exactly enthused to be given an assignment of interviewing Mister Rogers.

But Lloyd is astounded to discover what he never knew about Rogers; that the man on the screen is the same as he is in real life. The moment Lloyd pops on his studio set, Rogers drops everything he is doing to say hello. Nothing is more important to him at any moment than the person right in front of him who wants to speak to him, much to the chagrin of an impatient studio. Quite quickly, Lloyd soon learns that Rogers is no act. He fails at setting up a tent for an episode and rather than do another take or have the tent pre-made, he recommends the footage stays as it is. He wants to remain honest that not everything adults do always goes to plan and that this is okay.

What Lloyd discovers during his many talks is that Rogers is very selfless when it comes to conversations about himself. In their first discussion, Rogers is far more interested in how Lloyd got the scar on his nose than thinking of himself as a hero. Joanne, Fred’s wife, opens up a little more about Fred’s true self; he has a temper and he’s not perfect. If he were perfect, he wouldn’t be human and nobody would hope to be as good a person as he. It’s possible for all of us, even for someone as conflicted as Lloyd.

Though Rogers only plays a supporting role in the picture semi-based on the late 1990s article “Can You Say...Hero?” published in Esquire, his philosophy is palpable in trying to transform an adult. His words on not just for children. For years after his demise, his many interviews and archival footage touched me deeply, from his heartfelt plea to congress for funding to his award’s speech where he urges us all to think of those who loved us. A lot of nostalgic twinges are present in the picture but presented more like the important parts that make us better people.

This is a deeply meditative film that makes the eyes water for someone like Rogers to care about us that much. Easily the best moment of the picture is when Fred wants Lloyd to try his exercise of observing a moment of silence with our thoughts to think of all the wonderful people who brought us into this world and care for us. Fred is silent. Lloyd is silent. The whole restaurant they are at is silent. We’re silent. We’re left quiet with our thoughts, Fred staring at us hoping they’re happy thoughts. He thanks Lloyd and says that feels better. I felt better as well, once the tears were wiped away. This is without question one of the year’s best films.