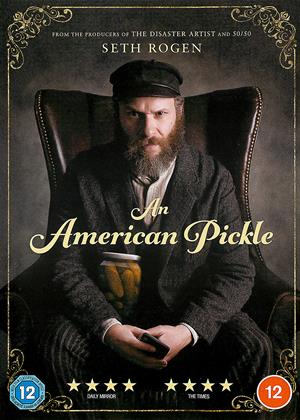 Reviews (9) of An American Pickle

I like Seth Rogan but this was poor. Culture clash between a guy from a 100 years ago is preserved in brine then meets his relative in the future. Yuh that old chestnut! I could deal with the unlikely premise if it was funny but its not. Just a lot of ranting. Its a short film but couldn't make it to the end. Poor.

This awful movie is a strong contender for the “ Worst Movie of the Year” award.

It’s just not funny, but racist too.

We turned it off a long time before the end, and by a quirk of fate , were able to watch Trump and the riots in Washington, live on CNN.

Seems strange that other people did not enjoy this film, i thought it was hillarious ,maybe its a generation thing i dont know.

But i laughed all the way through it.

Sometimes i think all people want these days are short cuts,rapid camera movements, and bullet sqibs .

This film was a reflection on just how much we take forgranted in todays society done in what i considered to be in a very clever humourous and observant way .

Forgive me but i did not find it racist where did that come from !

I read a couple of the reviews here who hated it and suspect the reviewers are too pofaced snowflake wokie to GET Jewish humour. It is NOT racist; it is caricature WHICH IS NOT THE SAME THING AT ALL.

Unlike most Hollywood comedies, esp the awful black-centric 'comedies' and the metoo ones, this film REALLY made me laugh. Yes, it's silly - but so what? Silly is good when you're in the mood. The ending's a bit weak BUT compared to the usual unfunny Hollywood movie 'comedies; this is great.

A happy fantasy which some lines that mane me laugh out loud! Seth Rogan is great as the 1920 immigrant from fictional East European country too (could be Ukraine or Moldova or anywhere like that).

Good simple fun. Great caricature. I HATED 'Knocked up' and some other Seth Rogan films BUT this is one of his best. IF you are not a po-faced puritan wokie who sees caricature and satirical comedy as racism, that is.

A great MARMALADE song in there too. REFLECTIONS.

Quite like Rogen usualy - intelligent doper humour - so rented this - but what pish - everything is wrong with this movie and yet the reviews do not seem that bad - this movie should have been shredded.

Comedy of culture clash - An American Pickle review by Martyn

Far better than I was led to believe from these reviews. Very funny. Obviously there is potential for humour in the mutual incomprehension of cultures 100 years apart, and this movie taps into that. At first it takes the piss out of the left with their knee-jerk reactions to attitudes from an Eastern European village a century ago (and those attitudes themselves), then, when the right rally behind him, it mocks them too, and finally he pisses everybody off including them with remarks about Christianity. Disturbing that anyone could dismiss this as 'racist'. Not sure whether they're being anti-semitic, or seeing the film as anti-semitic, or seeing some other form of racism, they need to explain themselves.

The concept has been done better (eg Sleeper) and this was poor - making more of what he thought of modern day society may have made it funnier and too often there was too much of a leap of knowledge by someone who would barely understand electricity never mind cars, aeroplanes, the internet etc etc without being intimidated, intrigued, bemused by it all to make the film actually 'believable' as an entity. Nothing was funny. Watch only to say that you have seen it.

A few early laughs then a sentimental soap. Goes downhill from about 40 minutes in and never recovers. Give it a miss.

How do films this bad even get released? If this film in any way engages your interest, you need therapy!