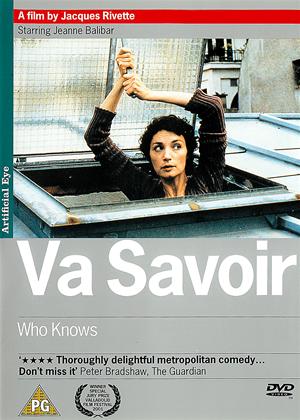 Reviews (1) of Who Knows

Va Savoir (Who knows) - Who Knows review by CP Customer

An aptly named film - after two and a half hours of waiting for something to happen, who knows what this film was about? Described as "an elegant and utterly charming comedy", I am left wondering when the comedy bit happened. Laugh? I wish I had.

A slow and desperately tedious film about the casually entangled lives of six people - two couples and a half-brother/sister - set around a tedious Italian play (in which the lead characters are both actors) this pretentious piece failed to offer elegance, charm or laughter. Just boredom. Two and a half hours of it. Two and a half hours of my life that I will never get back.

Surely one of the essential requisites of any good film must be that within the first fifteen minutes or so you are hooked - by the plot, the mystery, the characters, something. This film utterly fails to provide that engagement as the story slowly, apathetically meanders through the various sub-plots of old flames, possible new relationships, a long-lost manuscript an opportunist thief and this endless, meaningless, tedious play.

If it's a turkey you're looking for, look no further. Or try Waitrose in December.