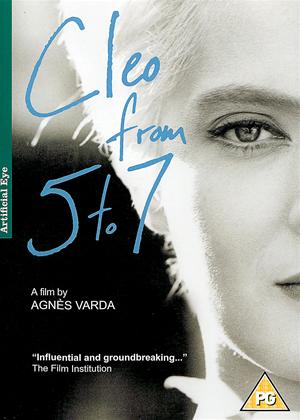 Half great, half boring, this is one of those films where hopes and expectations exceed the actual product. Wonderful passages such as Corinne Marchand as Cleo walking through the streets of Paris, or in a taxi with her maid/companion, or in a car with her friend, alternate with tedious scenes such as a song rehearsal, or the watching of a silly silent comedy. Worst of all are the final scenes, when Cleo meets a man in a park, and they strike up what may become a relationship - if she survives her illness and he survives Algeria. The pick-up and subsequent conversations are unbelievable and wearisome.

'Cleo From 5 to 7' has examples within it of the best and the worst of French New Wave. A focus on the person inside the outward show (when Cleo takes off her wig she becomes a very different person to the recording star); a focus on the moment, when what has gone before and what is to come is left to the viewer to question (if they want to); all this depicted by innovative camerawork. But there is also a predilection for philosophical blather, and the conviction that this blather is important. 'Cleo' doesn't have as much of this as, say, Godard, and is thereby a better film than any of his, but cameo appearances from some big names of the New Wave adds an annoying private party slant to the proceedings.

Marchand glides beautifully through the film, not having to emote much (her worry overshadowing all) - but when she does, it's unconvincing.

The best bits live up to all I hoped for from such an acclaimed film. The worst bits ensure it will not go on the favourites page.

The quintessential nouvelle vague film, from a female perspective to boot. So fresh, full of energy and verve. Has great cuts (Godard and his fabled jump cuts are not the only game in town) . Yes, it's a bit verbose, especially in the second half. Good stuff.