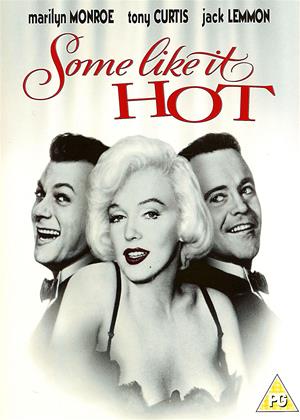 46 years since it was made and every bit as enjoyable as the first of manytimes I have seen this film. A great classic.

This movie is perfect. It has a perfect script, first and foremost, and it's perfectly acted - all actors act well, from Marilyn, Lemmon and Curtis to all playing small roles. The film never ever drags, is well-directed and has good pace.

And, most of all, it is genuinely funny - really laugh-out-loud funny: the men-dressed-as-women shtick is older than Shakespeare, but works well when well done - and this was very controversial on the film's release when test audiences didn't like it!

But this film is more than a drag act: it is highlight of the careers of all involved. I watch this film every year or two and I still think it's funny - and way funnier than any film I have seen in the last decade (Except Four Lions perhaps). This is the best comedy ever to come out of Hollywood in my opinion, and so massivley superior to the crude, lewd, unfunny gross 'comedies' Hollywood makes now. A perfect movie.

Marilyn Monroe was so perfect as Sugar, and Tony Curtis and Jack Lemmon were hilarious as women.

My first Classic movie and i LOVED IT!

Neo Screwball. - Some Like It Hot review by Steve Mason

Billy Wilder seems to be reviving the screwball comedy here, roughly seventeen years after it faded away about the time USA joined WWII. Surely that is why there are references to The Palm Beach Story, one of the last great screwballs. He is returning to the pure farce of the Lubitsch era, with a lot of visual humour among the wit.

As was typical of Lubitsch, Wilder went back to Europe for his story, a thirties French film called Fanfare d'Amour, and transplanted it to the USA, to the Chicago of the jazz age and prohibition. Two musicians (Tony Curtis and Jack Lemmon) witness a gangland hit and go on the run in drag as part of a female swing group fronted by Sugar Kane Kowalczyk (Marilyn Monroe).

Now it feels like an early bromance.  Screwball was usually about boy meets girl. The two men drive the narrative. But their relationship is of course complicated by the predicament that they are in the guise of Josephine and Daphne and travelling with a band of party hard girl musicians.

As is typical with screwball comedy, the film is a masquerade; characters pretending to be something they are not. The rather touching exception is Monroe, who as she doesn't know that Curtis is a man, lets down her guard and exposes her vulnerability. Monroe was famously impossible on set, but she delivers a performance here (and a couple of good vocals), not just dumb blonde schtick. But Lemmon and Curtis are superb, even inspired. For me, on the threshold of the sixties Lemmon succeeded Cary Grant as the great comedy star of his era. There is such detail in his performance.

Some Like It Hot is often named the greatest comedy ever made. I'm not sure it is even Wilder's best. But it is a brilliant work of  comic imagination, and not to be missed.

Better first time - Some Like It Hot review by JD

When I remembered seeing this 20 years ago I thought it was a timeless classic. It is a classic, but the acting, particularly from Lemmon, is cringeingly bad. The Chicago mob are unlikely to have been RADA. Tony Curtis and Marilyn however shine through this dross to make it worth rewatching.