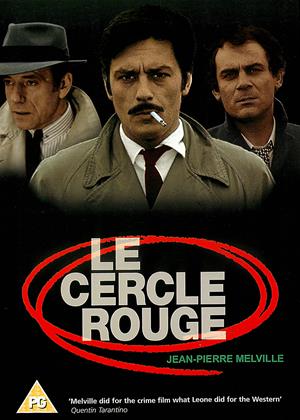 If Jean-Paul Sartre had written hard-boiled pulp fiction, the result would probably have been very similar to this incredibly strange Gallic heist thriller. Taking both its title and the essence of its plot from a Buddhist parable quoted in the prologue, it follows the attempts of several factions to accomplish various things that all play out with the precision of a chess game, and which all intersect, sometimes for outrageously unlikely reasons. The sole wild card in this clockwork universe is Alain Delon's anti-hero, the only character who ever does something important for no reason except that he felt like it. Of course, his "freedom" is an illusion, and just binds him ever tighter in the web of fate that ruthlessly ensnares all the characters.

The weird blend of gritty film noir realism and downright Surrealism is strangely fascinating. The jewel heist at the heart of the story involves state-of-the-art (for 1970) security so impregnable it's almost parodic, yet has a mysteriously overlooked hole in it so huge they might as well have left the back door open. Delon's enemies are able to find him without explanation anywhere in France if the plot says they can. Almost everyone lives in slightly Surreal houses, especially Yves Montand's alcoholic sharpshooter, whose bedroom wallpaper alone is enough to drive anyone to drink! No wonder his closet's full of giant imaginary spiders. And pay close attention to the two scenes in which the detective returns home to feed his cats; they're different edits of the same piece of film.

On the face of it, the movie is about tough guys pulling off an ingenious robbery, the wily cop they're up against, and a few other typical hard-boiled complications. But really it's a symbolic drama about the futility of struggling for freedom when destiny always gets you in the end, and your attempts to avoid it are what makes it happen. This aspect of the movie is perhaps overdone. Everyone seems to have oddly limited lives and personalities, and their whole world is so intent on forcing them to get mixed up with each other that if virtual reality had been a thing in 1970, this film might have been set in it. But it's very well-made, not like anything else you've ever seen, and so downright peculiar that it holds your attention. Fans of spaghetti westerns may be interested to see what Gian Maria Volonté, the villain in the two Clint Eastwood "Dollars" movies, is like when for once he's not overacting. Actually he's rather good.