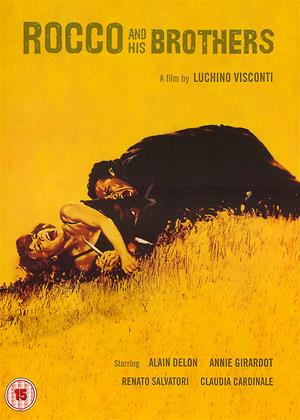 Reviews (2) of Rocco and His Brothers

A must for lovers of Italian cinema. - Rocco and His Brothers review by TE

Posting this review as an antidote to the strange review already on here, which approaches the film as if it was a documentary and damns the characters with judgemental disgust.

It's a work of fiction that explores the boundaries of family loyalty, in particular the tragic extent to which a brother feels compelled to sacrifice his own best interests for another brother.

The gender politics are typical of most movies made in the late 1950s, and at least we have Annie Girardot's brilliant performance to hint at changes to come. She is the real star of the film (Alain Delon seems a wan presence compared to his work in French films). Of course she is treated abominably, but she has a spirit and a fire that makes everyone around her appear small.

The film also deals with the tensions between the south of Italy and the north, a very contemporary theme.

A masterpiece of Italian cinema? Frankly, it hasn't aged well. Considering that it's almost three hours long, surprisingly little happens. Even the title is slightly inaccurate, since Rocco (Alain Delon) has four brothers, but only one of them matters or has anything remotely interesting to contribute to the plot, so that final "s" could have been omitted. Character development is, for such a long film, painfully crude. Very near the end, a minor character has to actually tell another minor character that Rocco is a wildly implausible and absurdly over-simplified person in a desperate attempt to lampshade the way he's been written. And when somebody finally asks if it's possible to get Rocco's mother to be quiet, viewers may feel like applauding him, since any sane person will have wanted the shrieking one-dimensional harridan to shut up, or ideally die, from the moment she first appeared on screen. Which, unfortunately, is right at the beginning of the movie.

Annie Girardot's Nadia, the tart with a heart, is basically there to provide tragedy, so she's treated abominably by absolutely everyone, including men who are supposed to love her, and much of what happens to her is completely unbelievable. Rocco himself is so saintly that at times he comes across as borderline retarded, and the (very) slowly building tension between Rocco and Simone, the only brother who really matters, is in the end oddly fudged and anticlimactic, the final resolution being offscreen. Which is a problem, since this fraternal conflict, along with the love-triangle which sparks it, is the mainspring of the plot.

I honestly couldn't decide whether Rocco's ghastly caricature of a mother was supposed to be comic relief or we were meant to take the intensely annoying old hag seriously, but the excessive unpleasantness of this character, the vile treatment of Nadia, and the odd fact that any female characters who are neither horrible nor being treated horribly are given as little screen-time as possible (fans of Claudia Cardinale will be disappointed to discover that she's in the film for about two minutes), gave me the unpleasant feeling that the movie was made by people who didn't like women very much. And some of the subplots, such as the hatred which instantly springs up between the protagonists and the family of an irrelevant brother's fiancée for no adequately explored reason, appear to revolve around things that don't need to be explained to an Italian audience but are baffling to everybody else. Possibly the notion of grown men being completely dominated by their mothers and unconditionally worshipping them even if they're overacted ratbags is profoundly moving and/or hysterically funny of you're Italian? I wouldn't know, and I just found it unbelievable.

This is a slow, old-fashioned film riddled with skin-crawling misogyny. The hero is a slightly feeble-minded plaster saint who sometimes behaves appallingly out of excessive and obviously misguided loyalty to his family, the heroine seems to have almost but not quite caught on that she's a fictional character and is cynically resigned to being a puppet without liking it one bit, and everybody else is horrible unless they're a nonentity. There are some powerful scenes, but I didn't believe in any of these people, let alone like them, so I didn't care what happened to them. I think this is one of those films it's heresy not to like if you're a proper movie buff because it's Italian arthouse cinema by Visconti and all that, but secretly the entire audience wish they were watching the new Bond film instead.