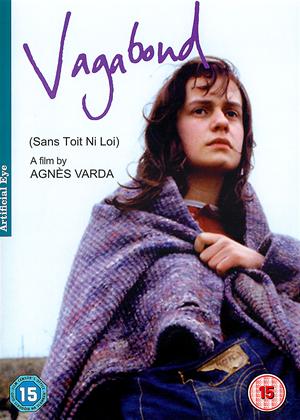 Vagabond is a fascinating film in every way. The direction, the narrative and the acting all combine to produce a timeless work of art.

It is interesting to imagine how this tale of a young female drifter would play out today, and to speculate how much has changed over the last 30+ years since Varda made the movie. It was made when society was moving towards a harsher time, with the new dominance of neoliberal capitalism. The film shows elements of a kinder, more tolerant world along with the nastier developments.

Mona's character and presence is an important moment for feminism in art. She challenges many of the people she encounters, and she challenges us as well. Her fate (which we know from the start) kept reminding me of the Richard Thompson song "Beeswing": "...maybe that's the price you pay for the chains that you refuse".

Well worth watching the extras too: the short film about the soundtrack music; and the wonderful little piece about the old lady.

Less a vagabond more a vagrant - Vagabond review by fm

Unpleasant young woman drifts around sleeping rough and smelling dreadful. She never has a word of gratitude for those who help her nor does she ever do a single thing which is not for self self self. You could suggest that the other characters project their needs and failings onto her, or that they construct fantasies about her soi disant freedom, but really, I couldn't be bothered. It isn't well acted either.