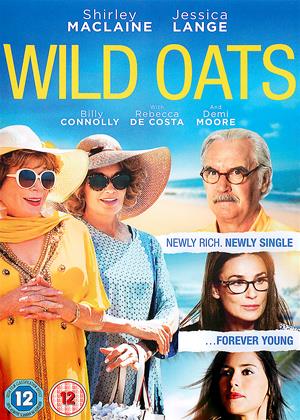 Unfortunately this film had no English subtitles so had to give up as I am deaf. Pity as it had a good cast and looked good. Pity that the distributors let down their actors by denying access to around 15% of the population.

Billy's last film? He got away with the what we did on holls film, but that was nearly 2 years prvious. Role had to be tailor made for this one.

He will be remembered as a comedian, of course......did use to play useful banjo........but he has done some very watchable films. Mrs Brown, Beautiful Joe, Man Who Sued God, and the Debt Collector, where he was very gritty. He was good on screen, and could easily made a career on stage and screen.

Have watched Billy since he first walked on Parkinson Show, and he has been a pleasure.......as was Terry Thomas, who also developed the nasty Parkinsons. I hope they keep him comfortable..............

Wild Oats features two charming elderly ladies who embark on an adventure that would give them the time of their lives. And this is exactly where the charm of the movie comes from: Wild Oats is a character-drive cinema that doesn’t rely much on storytelling to convey a certain message, or even to surmount to a plot. This is precisely why Wild Oats doesn’t even require a coherent story in order to be enjoyed; that is to say, Shirley MacLaine as Eva and Jessica Lange as the second lead character Maddie very much have the time of their lives (both on and off-screen I presume), which is really all Wild Oats’ about.

The film follows these two ladies right after the parting of Eva’s husband; in fact, by coincidence, chance, or some stroke of bizarre luck – Eva receives more than she bargained for as the life insurance company adds couple of zeroes and ships her check. And so, with some pats on her back by family and friends (mostly her close friend Maddie), Eva decides to use the money however she sees fit. And so the two of them pair up to the detriment of the life insurance company and another gentleman called Alvin (Howard Hesseman) who ends up in their pursuit. And thus Wild Oats begins.

In continuation, and we follow the film’s ascend into lighthearted comedy with dark elements sprinkled all throughout the story, as the friendly (and oftentimes confrontational) banter between the two leads slowly graduates into full-on joking. Which is where the Wild Oats really shines. Then, as reality creeps in, so does the narrative shrieks to a long-needed halt; I cannot think of another way of director Andy Tennant introducing the more serious elements in the film, so kudos to that. In fact, as Eva “burns” through her pile of “greens”, her insecurities resurface and she’s immediately stuck, as some would like to say, between a rock and a hard place.

For some reason, Demi Moore is also in the film as Crystal (Eva’s daughter), and is kind of a bummer that she doesn’t get enough material to make the character work. The other side characters, as with most mid-budget indie films, keep their heads afloat and that’s pretty much it. However, they amplify Eva and Maddie’s relationship and immensely help to push their motivations out on the screen. So to summarize: great chemistry between leads, so-so story, non-existent side characters, and a standard screenplay that works… most of the time.

All things considered, Wild Oats is a wild and a fairly enjoyable ride, suitable for a laidback afternoon watch with an old family photo album in one hand, and a box of high-quality tissues in the other. Because that album is overdue to be swiped.