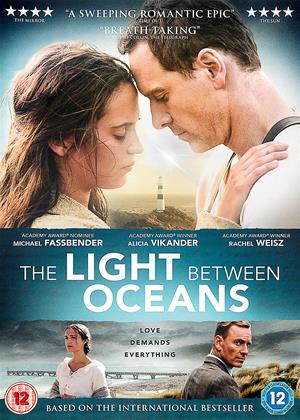 Synopsis:
Based on the bestselling novel by M.L. Stedman and from acclaimed director Derek Cianfrance, 'The Light Between Oceans' is a beautiful and heart-breaking reminder of the infinite power of love and the lengths that we'll go to in order to protect it. When lighthouse keeper Tom Sherbourne (Michael Fassbender) and his adored wife Isabel (Alicia Vikander) discover a baby adrift in a boat off the remote coast of Western Australia they assume the worse that her parents are dead. Determined to give her a happy life full of love they choose to raise the child as their own but it's not until years later that the shattering consequences of their decision will change their lives forever.
Actors:
Michael Fassbender, Alicia Vikander, Rachel Weisz, Florence Clery, Jack Thompson, Thomas Unger, Jane Menelaus, Garry McDonald, Anthony Hayes, Benedict Hardie, Emily Barclay, Bryan Brown, Stephen Ure, Peter McCauley, Leon Ford, Jonathan Wagstaff, Gerald Bryan, Elizabeth Hawthorne, Rosella Hart, Michael Wallace
Directors:
Derek Cianfrance
Producers:
Jeffrey Clifford, David Heyman
Writers:
Derek Cianfrance, M.L. Stedman
Studio:
E1 Entertainment
Genres:
Drama, Romance

Reviews (4) of The Light Between Oceans

Extraordinarily faithful to the book (and consequently perhaps a bit too long) this film was beautifully acted and beautifully filmed. A lighthouse keeper and his wife find a baby washed up in a boat on the shore; a dead man is also in the boat. Given a man who has always done his duty in the methodical stiff upper lip fashion of colonial servants of the Empire and a fun loving woman whose three brothers have been filled in the Great War this gift presents a dilemma. This movie chronicles their decision and its consequences.

OK so I cried in the end.

Heart warming film - The Light Between Oceans review by sg

This has stunning visuals and a really good, feel good movie. We have never rated so called "period" films but this film was fantastic the

acting from the 2 main actors was brilliant. To tell you the truth we have never seen a Michael Fassbender film before but after seeing

this he is on my top 5 list of superb actors. I can't really tell you much about the films story as we don't want to spoil it in anyway. Just sit

down in your comfy chair and watch a brilliant film.

Watchable Film - The Light Between Oceans review by PC

Not really my cup of tea but a watchable film, Alicia Vikander plays her part perfectly, a great actress

All at sea - The Light Between Oceans review by cc

Tragedy of Greek proportions - and Greek duration! It’s hard to fill Paradiso’s 100 minimum characters without spoilers. Most entertainment might be debating all the possible endings with fellow viewers

The Light Between Oceans review by Mark McPherson - Cinema Paradiso

The Light Between Oceans is a movie about forgiveness. Can you forgive your wife for covering up a murder? Can you forgive a couple for kidnapping and raising your baby for three years? Can you forgive this movie for using such subject matter in the tone of a soapy Lifetime movie? My answers: No, no and absolutely not.

The movie begins way too strong by building up the leading couple as a passionate pair. Michael Fassbender plays Tom as a reserved World War I veteran who comes to a small Australian town off the coast to attend to the lighthouse on a secluded island. Though initially seeking some peace and quiet, he didn’t count on falling in love with the beautiful Isabel, played by a stunning Alicia Vikander. They fall in love, get married and live together on the lighthouse island through a series of soft moments and montages.

But life turns bitter when they try to conceive a child and fail with two miscarriages. And the two scenes of these miscarriages are rather depressing in how I had to watch Isabel struggle in agonizing pain and Tom cower over what to do. The prospect of being a family seems to be just outside their grasp. And then a blessing comes to the couple when a baby girl floats in on a boat. The only problem is that the baby’s father is dead in the boat, which suggests that there may be a mother seeking her child.

All Isabel can see out of this situation is the chance to raise a baby. She thinks nothing of burying the body, concealing the identities and raising the child as her own. Tom tries to coerce her into contacting the police in hopes that they can adopt this supposed orphan, but he regretfully goes along with Isabel’s inhuman plan. He buries the body, ditches the boat and the two proceed with their happy family life as if nothing horrible ever happened in their lives.

This whole plot reminds me of the same tone for the dark comedy Very Bad Things, in which a bachelor party accidentally murders two people, secretly bury the bodies and then attempt to deal with the guilt. As with that movie that attempted to find humor in the guilt of an inhuman act, The Light Between Oceans wants us to weep at love lost for a situation these characters placed themselves in. It wants us to feel something for Isabel’s plight when the true mother Hannah (Rachel Weisz) finally comes into view. It’s hard to feel anything for a woman who intentionally put herself in an illegal spot by hiding a body and kidnapping a child.

I felt terrible for this child who at the age of four has to deal with the awkward and disheartening scenario of being torn away from Isabel and handed over to her mother Hannah. Kudos to the child actor who perfectly conveys the innocence and sadness of being ripped from the family she believed to be her own. In a rather soapy drama, she stands out as a real child who has too much to take in. It’s just too bad that she’s mostly kicked to the curb by the third act in which the movie seems far more interested if Tom will go to prison, if Isabel will take responsibility for her actions and if Hannah can forgive the both of them. Don’t worry about the child’s development as that’s quickly swept under the rug and she grows up just fine.

For a movie that wants me to care about the love of a couple, it makes a big mistake by bringing a child into mix for drama that shouldn’t be so soft. Director Derek Cianfrance attempts to evoke emotion from the audience with beautiful cinematography, decent performances and somber music, but his tricks will not work on me. This is a movie entirely dependent on being about redemption without any of the grunt work to earn such a goal. Hannah is able to forgive this couple for raising her child as a baby and concealing her husband’s body. It’s not exactly something that can be forgiven in a week as it was in this movie. And it’s not something that can be easily excused for some limp romantic drama.