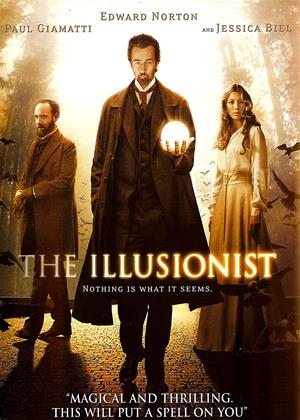 Reviews (8) of The Illusionist

Clever and Entertaining - The Illusionist review by Rob S

Thoroughly enjoyed this one and thought the, albeit fairly obvious, twist at the end was well executed and tied up all of the loose ends perfectly. Edward Norton does a fine job as the magician who returns to claim his childhood sweetheart who was banned from seeing him. Giamatti steals the best acting credits though as the detective who tries to piece together whats going on and feels ever more concerned at following his employers whimsical requests to get rid of evidence and various people.

All in, a great couple of hours of entertainment.

A delightful fairytale. - The Illusionist review by Nipper

"Suitable viewing for all the family" is a phrase that would normally make my heart sink but this fine little film really does the job. A good story beautifully told. An illusion so well put together I almost believed it myself.

Giamatti is superb as the noble policeman trying to be loyal and Sewell clearly enjoys himself as the nasty bad guy. The main story is about a magician and his rekindled romance with childhood sweetheart Sophie. Some clever illusions which are explained at the end. You will probably guess most of it, but it is nonethless entertaining.

The Illusionist is a well acted and engrossing drama with many a twist and turn. Edward Norton and Jessica Biel take the main roles but it is the performance of Paul Giamatti as Inspector Uhl which really sticks in the mind

Now you see it, now you shouldnt. - The Illusionist review by NC

Had an enjoyable time watching this film. Thought Edward Norton was good and enjoyed Paul Giamatti. Thought the story was interesting, even if there were a few holes in plotlines.

This film has many layers: detective, political intrigue, the psychology of tyrants, and the triumph of "politically powerless" individuals over the system. We are given a glimpse of mystical powers of creating illusion, with hints of holograms being projected. This is a film more suited to viewers with very enquiring minds who enjoy an intuitive challenge.

Nothing Up My Sleeve - The Illusionist review by Count Otto Black

It seems I didn't enjoy this film as much as most other people did. My main problem with it is that it was based on a short story, and boy, does it show! There simply isn't enough plot to sustain a 100-minute film. A 50-minute episode of that old TV show "Roald Dahl's Tales Of The Unexpected" maybe, but a movie twice that length? Events do not exactly move at breakneck speed, and we spend a great deal of time taking a long, leisurely look at the scenery. It's very nice scenery, and beautifully photographed, but it's still scenery, not action. Also, if you didn't see that ending coming almost from the beginning, all I can say is that you must have failed to notice the title of the film!

The other problem is that the logic behind the events is somewhere between muddled and non-existent. When a clear explanation is required for some plot twist, it's nearly always the simplest and most predictable explanation a lazy scriptwriter could rattle off on autopilot. If, on the other hand, it suddenly occurs to somebody that a particular visual effect would look nice, our hero apparently gains supernatural powers that enable him to do tricks which are flat out impossible, and for which no satisfactory explanation is ever given. Maybe this is meant to make him seem enigmatic, but coupled with Edward Norton's forgettable performance, it just seems as though the writers couldn't even be bothered to make up their minds whether it was meant to be a fantasy or not.

Talking of acting, Paul Giamatti is supposed to be second-billed, but he steals it hands down as a rather stupid policeman who could have been a nonentity, and bad guy Rufus Sewell, with all the character depth of Dick Dastardly and none of the redeeming features, gleefully chews the scenery, but I can see why this movie didn't result in Edward Norton landing the rôle of Doctor Strange. And Jessica Biel's in it too, mainly as decoration. So overall, beautiful photography, slow pacing, predictable plot, better acting from the supporting cast than the people we're supposed to care about, very lazy scriptwriting indeed, and peculiar confusion about which genre it's supposed to be in.