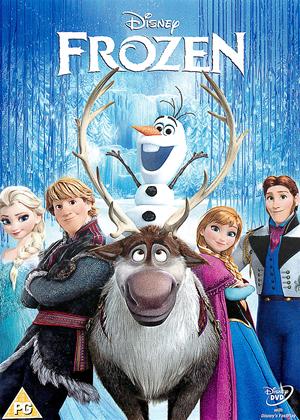 Let it go... - Frozen review by Milstead On Movies

Am I missing something?

I just didn't seem to enjoy this as much as the rest of the world. Sure it's great animation in the usual Disney style with the studio's twist on a fairytale with the usual princesses, hulking heroes, dastardly villains and talking animals (well, snowmen in this case) but what makes this the most successful Disney film ever exactly???

The film's trailer had a walking, talking snowman named Olaf and a reindeer fighting over a carrot (Olaf's nose), but none of this comedy was in the film, instead it's an adaptation of a Hans Christian Anderson story where a newly coronated queen with magical powers hides in a fortress of solitude and makes her kingdom perennial winter while her sister is on a quest to break the curse.

It was entertaining, but I could've quite happily watched a whole film of tug-of-war over the carrot.

The songs (and there are many of them) are grating and enchanting in equal measure. 'Let It Go' is a truly great Disney song, but some of the others are simply too twee.

Overall, I'd say it's a good family film, but it's so incredibly overrated.

That's quite hard for me to say, because in recent years I have found Disney's animated films to be too trite, too schmaltzy, too syrupy-sweet, too American. There are honourable exceptions of course ('Brave' and the 'Toy Story' series come to mind) but suffice to say that taking grandchildren to the cinema often just sent me to sleep.

'Frozen' is very, very derivative. It's loosely based on 'The Snow Queen' fairytale by Hans Christian Andersen + elements of yet another 'princess' adventure, 'Tangled' (itself based on the 'Rapunzel' fairytale by the Brothers Grimm).

Many of the classic Disney films have been based on fairytales eg 'Snow White', 'Cinderella' and the less successful 'Sleeping Beauty'. So it is a return to some of Disney's early roots - and it is rather well done.

The characters are well drawn, the story is fine (as expected, there are many departures from 'The Snow Queen'), the music is good (there's lot's of princess singing) and it's moderately exciting. Not bad - but I did find the animated snowman annoying, although the character is successfully used to inject a bit of humour here and there.

But the real verdict is that the kids enjoyed it - and it didn't send me to sleep :)

Has to be a 5 as not found a kid that does not like it, and know all the words to the songs! Has to rate as one of the best ever kids films of modern times, along with Ice Age and Shrek etc.............

Disney has entered a new phase with its animated films as Frozen feels remarkably like Tangled as a princess goes on a dangerous journey with a tough yet lovable man and his trusty reindeer. The whole feature is ripped from Tangled’s pages despite a few well placed twists and turns that keep Frozen from being an unfortunately timed remake.

The film follows Princess Anna (Kristen Bell) as she must depart her home in the palace to track down her sister Elsa (Idina Menzel) who fled the kingdom when she revealed that she could create ice and snow. However when she left she turned the entire kingdom to ice and Anna must find her and bring her back so that she may save her kingdom from the harsh and unexpected winter.

While the story can devolve into a mess of Tangled ideas the film really shines through its comedy and action which prove to be much more impressive than the aforementioned Disney picture. The addition of talking snowman Olaf (Josh Gad) is a stroke of genius as the animators use him to pull off some audacious and downright funny physical comedy. Bell also keeps the film light and flowing while sneaking in a few cheeky one liners.

The film’s climax doesn’t stick to normal Disney convention which inspires a level of confidence for future pictures and also makes Frozen’s ultimate conclusion a blurrily fun, fast paced and decidedly epic set piece filled with tension. Musically the film plays it safe with its Broadway heavy cast as usual but their willingness to poke fun and reach for some unexpected laughs makes Frozen a cool little film indeed.