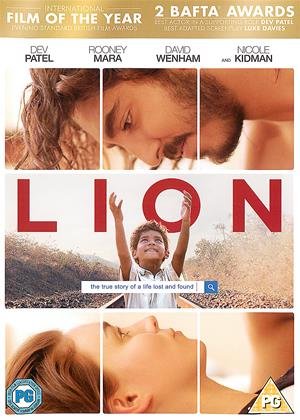 Synopsis:
Five-year-old Saroo (Sunny Pawar) gets lost on a train travelling away from his home and family. Frightened and bewildered, he ends up thousands of miles away, in chaotic Kolkata. Somehow he survives living on the streets, escaping all sorts of terrors and close calls in the process, before ending up in an orphanage that is itself not exactly a safe haven. Eventually Saroo is adopted by an Australian couple (Nicole Kidman and David Wenham), and finds love and security as he grows up in Hobart. As an adult, not wanting to hurt his adoptive parents' feelings, Saroo (Dev Patel) suppresses his past, his emotional need for reunification and his hope of ever finding his lost mother and brother.
But a chance meeting with some fellow Indians reawakens his buried yearning. Armed with only a handful of memories and his unwavering determination, Saroo sets out to find his lost family and finally return to his first home.
Actors:
Dev Patel, Nicole Kidman, Rooney Mara, Sunny Pawar, Abhishek Bharate, Priyanka Bose, Khushi Solanki, Shankar Nisode, Tannishtha Chatterjee, Nawazuddin Siddiqui, Riddhi Sen, Koushik Sen, Rita Boy, Udayshankar Pal, Surojit Das, Deepti Naval, Menik Gooneratne, David Wenham, Keshav Jadhav, Benjamin Rigby
Directors:
Garth Davis
Producers:
Iain Canning, Angie Fielder, Emile Sherman
Writers:
Saroo Brierley, Luke Davies
Others:
Luke Davies, Dustin O'Halloran, Hauschka, Greig Fraser
Aka:
A Long Way Home
Studio:
Entertainment In Video
Genres:
Drama
Awards:

I had known nothing about this film before I watched it, except that a number of friends had recommended it. It was compelling from the start, as well as having a very authentic feel. I found it incredibly moving, not necessarily in a tearjerky way, but more deeply than that, reflecting as I was on the movement of children across our globe whether voluntarily in search of different lives, or perhaps under circumstances beyond their control. There are so many little lost travelling boys and girls. It was so powerful to witness this one's story, so well told.

Stunning cinematography and a deeply moving true story. Both actors who played the young and old Sarro (Sunny Pawar and Dev Patel) put in sensational performances with Sunny in particular for such a young actor. This film really leaves its mark on you and the footage and words at the end are amazing. A must watch!!

Excellent film. In the first half, we see how a 5 year old child can get lost in India and almost overwhelmed. The child is rescued from dire conditions on the streets of Calcutta and in a Dickensian orphanage and brought up in Australia, but as a young man becomes increasing driven to find his way back to his village and mother in India. Google Earth turns out to be his means of achieving this. Good acting by Dev Patel as the young man and Sunny Pawar as the child. Others have found the film too long but I didn't. It gripped me throughout. Make sure you watch the final section of the film to see the real life characters on which it is based and to find out exactly how the boy Saroo came to be lost.

Amazing true story. Should have won lots of awards in every category . Amazing performance by young Saroo.

Content highlights plight of abandoned children in India, and all over the world. My prayer is that people in the position to do so may be inspired by the film  to help alleviate this appalling situation.

A four-year-old boy in rural India goes to sleep in an empty train and is carried 1500 km to Calcutta, a totally foreign world where he is too young to be able to explain where he comes from. He escapes harrowing incidents with child-traffickers and a Dickensian orphanage to finally be adopted by an Australian couple. There he grows to young manhood in a loving and supportive family. It would appear that he is headed for a happy and secure life, but he can not escape the need to try to find the life and the mother he was ripped away from 25 years earlier. Google Earth and a few dim geographical memories are all he has to go on.

You know he's going to succeed - the film just wouldn't quite make sense if he didn't - and indeed he does. The reunion with his mother is a very touching scene. The thing is, if this were just some script writer's imagined story, it would seem altogether too contrived to be believable. But that's not what it is: it's a very accurate (as far as I have been able to discover) retelling of that child's true story. Somehow, knowing that makes all the difference in the world to me. The film closes with genuine photographs of the Australian family through the years, and a brief video of the meeting in India of the adoptive and biological mothers is enough to bring tears to a statue.

As one review stated, "Lion's undeniably uplifting story and talented cast make it a moving journey that transcends the typical cliches of its genre." I couldn't agree more.

A very good film, well told and well paced. A bit of a tear-jerker at the very end. By the by, people often joke about who has to play them when the film of their life is made; Kidman is flattering in the role but not the right woman; Sheru is also something else again when you see the true characters shown at the close of the film.

Unusual and good to watch - Lion review by CA

Did not know what to expect but my wife and I did enjoy watching this somewhat unique film. In some ways sad but very well presented. Definitely recommend it if you want to see a serious film.

Saturday night on the sofa - Lion review by BY

Good story, well told. Good cinematography, easy on the eye. Emotional, in all the right places. I'm avoiding 'heart warming' because it is a rather serious issue.

Only complaint was a sex scene that added nothing to the narrative and rather stopped this from being something I could have watched with my grandchildren - harrumph!

Bit slow and padded out, but shows the plight of small children in emerging countries..........think is way worse in Brazil! Basic story has to be drawn out for quite a time to make the film, so plenty of padding.

What a story and true to boot so interesting.... Very moving and sad with thank goodness a positive ending

Lion is a well-acted, though-provoking, hipster-free tearjerker drama that stays with you long after you’ve watched this film for the first time. Now let’s be blunt: Lion features an impressive cinematography, well thought-out script, and acting like you’ve never seen before from a half-Hindi feature that somehow found its way onto Uncle Sam’s big screen. And despite telling a story that spans over the course of twenty-five years, Lion never, ever feels like it overstays its welcome – an impressive feat to say the least (scorning at you The Revenant!). And where others have failed, Lion succeeds in building an ever-lasting legacy that won’t be forgotten (at least for those who watched the film) as opposed to (mandatory comparison incoming) another well-known feature called Slumdog Millionaire. Now let’s see how it went down.

The film starts with Saroo (wonderfully played by Sunny Pawar), who gets lost after he and his brother leave their village in order to do a job of some sorts. Unfortunately, young Saroo cannot find his way back and gets lost in the crowded streets of India. From here thereon, the film follows Saroo in his own personal Odyssey as he tries to trace his roots and find his real identity in a world that’s long forgotten of what means to be human. Which leads us to the main anchor of the film: its overarching themes.

And there are many. The theme of identity in a foreign land; the theme of poverty and survival; and of course, my personal favourite: the theme of love. Love of parents, siblings, significant others, and everyone who lends a helping hand in dire times of need. Lion gracefully handles these themes both via young Saroo and his older version as well (played by Dev Patel), whilst also leaving some room for elaborate thought. That is to say, Lion doesn’t bash your head with pseudo-intellectual garbage, but instead it subtly shows how a simple wrong turn can make all the difference in life. And everybody can become estranged, no matter how rich or poor you are or what car you’re driving: it’s just the way of life.

The supporting cast also delivers. Nicole Kidman appears in a small role, but steals every scene she’s in, as if the actress experienced a long-needed recuperation from blockbusters or other bid-budgeted messes period. In fact, the cinematography perfectly captures her emotions, which felt as real as humanly possible (and even eerie at times). David Wenham as Saroo’s father also does a solid job and knocks this one right out of the streets of India.

Finally, Lion is a slow-burning drama that will hit you as hard as an amateur boxer’s punch: meaning it’ll hurt, but it’ll also pass with you coming out the wiser full stop. If you haven’t already, go ahead and see Lion, and I’m not going to repeat this twice.