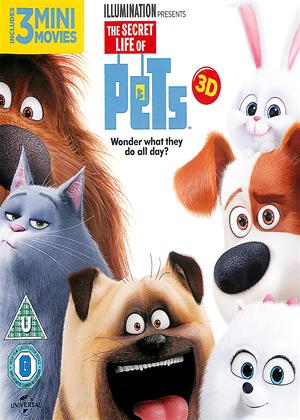 Rent other films like The Secret Life of Pets

Reviews (6) of The Secret Life of Pets

The very funny trailer is deceiving. This depicts the beginning of the movie which hereinafter descends into real kids stuff. Very little for the grown ups unless you like numerous and tedious manic chases thru NY traffic by a plethora of animals with a dearth of any strong characteristics. Seen at the cinema. Very disappointed although I understand it is highly rated by all those under ten!

Kids films get cleverer than adults? - The Secret Life of Pets review by NC

Have had fish, toys, ogres, and toasters, and all sorts of animals , the list goes on.........some actually have ordinary people to do the voice-overs, so saving the millions paid out to has-beens trying to maintain their lifestyle without the make-up, or harsh reality of cameras.

Very clever film that actually motivates along quite well. Grandkids were loving it, and could watch it with them without it being a fag.............

Not nearly as funny, clever or charming as it thinks it is - The Secret Life of Pets review by PV

This is a so-so film which is also very irritating.

Things I didn't like about this movie include: it was VERY derivative (scenes nicked from many films - like big jump into water; vehicle about to fall; car chases galore); the way the animals are all basically people - they refer to places and the names of other animals (like butterflies) - where it'd be far more clever to see things from the animal point of view more; I disliked the silly car chases especially; I disliked the rap culture references; the ending was so weak I cannot even remember it. Yet again, cats are shown as the villain and yet another movie focuses on dogs - this is getting very boring!

Things I did like: certain scenes and jokes (the sea monkeys); certain characters - esp the Eagle. so it's all better as a series of vignettes and sketches rather than a coherent movie. One thing: the film makers VERY wisely use already-famous songs in this instead of getting some 4th rate song and slotting it in - that was a great relief! So we have Queen and a few other classic songs (esp the one over the sausage dream sequence).

So all in all 3 stars and no doubt little kids with love the loudness of it all and the cartoon chases. But the person I was with said after it ended: thank goodness I didn't pay money to go to the cinema to see that.

Bizarrely, this is mostly made in France to take advantage of tax breaks. Bizarre. But nothing French about this film - it's 100% loud American. 3 stars. Watchable but just that and just once!

Why the fuss? - The Secret Life of Pets review by MD

Everybody seems to have been talking about this film as if it were the next big thing in animated movies, but what a disappointment it proves to be! It has a few cute characters, a few laugh out loud moments, and is certainly fine for young kids, but very little about it seemed original or stimulating or engaging. Talking animals in themselves are no longer enough to put a spark into a movie, and without any really intelligent ideas or a groundbreaking new angle on an old theme, this limps along in an all too predictable way to an all too predictable conclusion.

We watched this as a family and bearing in mind I have two teenage boys - we all found it enjoyable enough.

It's not one of the best ones but it's the standard fayre you expect from animation movies these days.

We found it quite funny, perhaps having 'fat cat' of our own, with similar tendencies when she younger, had something to do with that!

The people at Illumination Entertainment, the studio behind Minions, seem to have dedicated their talents into developing the best animated gags. For The Secret Life of Pets, they’ve developed a wealth of pet gags that open the picture. A cat temps itself with the food in the fridge, a bird pretends to fly with the jets on television and a dog uses kitchen appliance as a back massager. At some point, one of the animators had the great idea of turning this idea into a feature-length film. What they didn’t exactly think through was the story of such a concept that came off more as animated movie screenwriting 101.

This is perhaps the most aggravating aspect of Illumination Entertainment; they will always make movies that are cute to be sure, but well below the emotional resonance of character that every other studio does far better. There’s a decent premise with dog Jack (Louis CK) dealing with the new addition of big dog Duke (Eric Stonestreet). With not enough space for the two of them, they fight each other until eventually losing their way home. Lost on the streets of Manhattan, the two dogs must learn to work together and trust one another to make it back to their master.

You’ve most likely seen this formula plot in half a dozen animated films. As such, you’ve seen this done far better as well. Rather than work to make this duo likable and relatable, The Secret Life of Pets just sort of goes through the motions without any of the grunt work. Every plot element arrives on schedule, tightly wedged between as many pet gags as the movie can muster. There should be a sense of tragedy when Duke discovers his old master is dead, but there’s not build up to this scene. There should be a sense of pleasure when the two break into a sausage factory for a meal, but it only serves as another excuse for a series of gags.

Thankfully, there’s a B-plot that almost saves this movie. Jack has a girlfriend dog Gidget (Jenny Slate) that’s determined and motivated enough to venture out into the city for her love. She assembles a rescue team composed of various pets from an apartment complex. Some are wise old dogs (Dana Carvey), some are dangerous falcons (Albert Brooks) and some are just apathetic cats (Lake Bell). These characters are all very colorful and offer plenty of great comedy, even if they are lacking in any sort of arc.

To offer up a modicum of danger, Jeff and Duke are pursued by a group of anti-owner pets that live in the sewers. Led by a crazed bunny, voiced by Kevin Hart, these pets provides some obstacles with their gang that is all talk. With the scorn of the human world, one would think there would be a little more to such a villain with perhaps some pathos or commentary on human-pet relations. One would be wrong. Kevin Hart simply does his best to be loud and improvisational with his meager character. He leads an army of animals through the sewers to take out all pet owners and pets that refuse to disassociate themselves with their masters. Cultural commentary perhaps? If only the movie were that competent.

One massive improvement over the studio's previous efforts of yellow minions is in the design department. All the pets have varying designs which gives them distinguishable features and real personality. The setting of New York appears big and vibrant with plenty of color. But I couldn't help noticing how devoid of people the city appears when the pets all run amok in its streets during the day. The only humans that seem to be present are dog walkers and dog catchers. Even the humans in traffic don't seem to question a moment when a rabbit drives a bus. Perhaps they've seen too many of these animated movies as well to be shocked or surprised by such a sight.

And now comes that hardest part of the review where I throw my hands up in defeat of Illumination Entertainment. For as much as this movie was formulaic, right up to the overused manic car chase of the climax, I must admit that the movie did make me laugh. For being all about pet jokes, the bits are amusing enough and used well enough that parents won’t be too bored by such a lackluster script. The bookend segments of what pets do when we leave and how they act when we return is when the movie really shines. It’s just that pesky adventure in the middle that displays how little thought the studio put into such a concept.