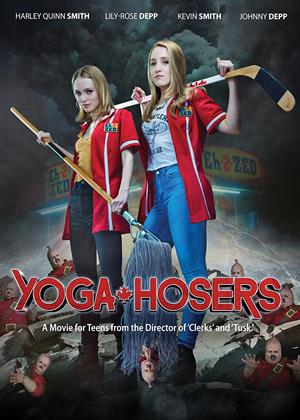 Sign up
An Evening with Kevin Smith 2: Evening Harder

Sign up
Jay and Silent Bob Get Old: Teabagging in Ireland

Sign up
Alvin and the Chipmunks: The Road Chip

Sign up
Jay and Silent Bob Get Old: Teabagging in the UK

Yoga Hosers is a movie that should be used at exhibit A for how far Kevin Smith has lost his way. In 1994, he made a movie about two clerks who were witty and philosophical, but also written in a true-to-youth tone for two guys that close the store to play a game of hockey on the roof. Decades later, he’s duplicated the same premise, but has now swapped the genders, made them close the store for band practice and speak in stereotypical hashtag slang between having their heads buried in their phones. Any ear that Smith might have had for youth and slacker culture has gone long deaf.

Staged almost as a father/daughter project, the daughters of Kevin Smith (Harley Quinn Smith) and Johnny Depp (Lisa-Rose Depp) star alongside their dads in this misguided horror comedy. The two girls play a duo known as The Colleens, employees of a convenience store that spend more time singing in the back room than manning the register. They sneer and smugly insult the customers not out of any mindful madness and regret for working such a job; they’d just rather be at a party. Or they have aspirations of becoming famous singers. Or they want to hook up with the hotties in the higher grades. Or they want to be yoga masters. Or they want to be impressionists. These two girls are so scattershot in their goals and tones they make the aimless nature of the clerks in Smith’s Clerks appear as ambitious. And if you think it’s unfair to compare this movie to Smith’s breakout masterpiece, he dug that grave himself by repurposing that movie’s most memorable line into a lame battle-cry.

The first act of the movie is a massive waste of time until the horror element kicks in. We’re treated to the Colleens singing a bunch of songs. They cannot sing well, but I’m assuming Kevin Smith thought we’d get used to it the way he forces about five full length musical numbers. A slew of characters are introduced with a video game style screen of emojis and hashtags, a gimmick that becomes annoying very fast. It’s a pointless gimmick as well considering that over half these characters will never be seen past their introductions. Considering that most of them are caricatures, speaking in trying-too-hard-to-be-hip dialogue that no human on Earth would mutter, the fewer of them the better.

Finally, after over forty minutes of non-anticipation, the movie unveils its monsters: the Bratzis, pint-sized Nazi soldiers in the shape of brats, all played by Kevin Smith. Did you like that pun of brats and Nazis? Get used to them as Smith as a million of them, mostly related to Canada. As with most of the plot elements in this movie, such as the boys that the Colleens fancy are satanists aiming to kill them, the Bratzis are given no build up and just sort of show up. Even the Colleens don’t seem all that phased by their appearance. Sure, they’ve seen some weird stuff as in Smith’s previous movie Tusk where they uncovered a human-to-walrus conversion, but I’d imagine Bratzis would still hold a bigger surprise than acting as though their store is infested with rats.

The girls are far too confident for such a bizarre situation. The Bratzis show up and they’re quick with their yoga moves to defend the store. Their dates try to kill them and they’re quick on the draw with a knife. And yet, at the same time, they seem more concerned about the possession of their phones and what outfits they should wear. These are not so much characters as they are elements of a female fantasy smashed together. It’s not important that Smith develops these two girls to have an arc. All that matters is that they get a chance to use yoga moves to fight bad guys. They’re heroes at the beginning of the movie and still the same heroes by the end. They won’t learn anything except make another notch on their wall of weird discoveries.

Smith tries too hard to make his horror comedy silly, almost as if he’s afraid to stray from his common comical tone. Johnny Depp brings nothing to the returning role of an inept French investigator who can’t hold an accent or a joke. The true villain is a frozen Nazi that is obsessed with doing ho-hum impressions of celebrities after binging on Netflix. There are some cameos by the likes of Stan Lee and Kevin Conroy (the voice of Batman), but this may be some of the worst uses for these actors, making constant references to where they’ve been and what they’ve done. Even the big boss of the finale, a giant hockey monster dubbed the Goalie Golem (because Canada jokes), holds no amount of danger, appearing more as a leftover monster from Power Rangers.

As if to get some sort of revenge on his naysayers, Smith writes the true plan of crazed Nazi is to kill all the critics. Depp reasons that it’s not such an evil plan, deeming critics as not real people. This could be considered an attack, but it’s a fair one considering nobody in this movie acts like a real person.

I didn’t much care for Smith’s previous horror-comedy Tusk, but it at least had some direction and some decent acting from all involved. It’s a masterpiece in comparison to Yoga Hosers, which is a trainwreck of ideas that never congeal into the hip, sassy and silly horror-comedy Smith was aiming towards. And, wow, is it painful to watch. Maybe I’ve become an old 30-something that’s grown to despise the “whatever, girl”, emojis and hashtags, but these “heroes” grated on my nerves to no end the way they are never defined, always singing, sometimes stupid, sometimes blood thirsty, always annoying. I may not speak the language of their generation, but I’ll give it a shot: #YogaHosers #WorstMovie2016