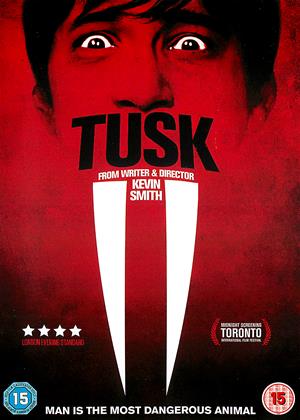 This is not only Kevin Smith's worst film =- it is probably the worst movie from 2016 and already features on many such lists .

If you watched the Human Centipede and .liked it, this the probably the sort of film for you - if not avoid it - like the plague..

For most people the latter is mos tcertainly the more sensible course - this film really is a stinker.

Wow.... A really Bizarre Movie. Not fabulously made but really good anyway . Its so strange you cant help but love it.

Im not sure what else to say other than i LOVED IT . it was Bonkers ! easily the Best Movie ive seen in Ages.

Sort of a Frankenstein / Silence of the Lambs /Misery Mash Up . only Much Weirder than you could possibly imagine .

Director Kevin Smith seems to be taking his movie career in a different direction. Once revered as the voice of a generation with his hit independent slacker comedy Clerks, Smith now appears to be shifting into the realm of horror. He made an admirable first step in 2011 with Red State, a little thriller about a militant church and the violent confrontation with law enforcement. And now it appears that he wants to dabble in the creature-feature genre with a proposed trilogy of terror. But if Tusk is a sign of things to come for his journey into horror, I fear we are in for a dark and rocky chapter of Smith’s filmography.

The snide Wallace Bryton (Justin Long) finds himself at the dead end of a lead for his viral video focused podcast show, inappropriately and preposterously named The Not-See Party. His Canadian target was supposed to be the Kill Bill Kid, a boy made famous for severing his leg, but he turns out to have committed suicide. Desperate for a story, Wallace spends an extra night in Manitoba with Howard Howe (Michael Parks), a man offering a room for the tired and stories for hungry ears. The wheelchair bound retired naval man entertains Wallace with his tales of walruses and shipwrecks before the drugs take effect and Howard has his new test subject.

From here on out, this is mostly a torture picture. Howard chops up Wallace’s limbs and slaps more on for his mad experiment of turning a human into a walrus. This is a man who has an unhealthy obsession of walruses, babbling on in screwy rants about how humanity has failed him and how he now seeks the company of mammals. The carving of Wallace is an unpleasant and disgusting enough experience. The final product is even more disturbing and depressing with Justin Long being wrapped in stitched flesh and glued on tusks with whiskers. He flops around with a blank stare, arfing and barking in his irritatingly high voice. There are no subtitles to confirm if he is pleading for help or bored to death by Howard’s never-ending tales. One of the stepping stones he reveals on his road to madness include the tired trope of childhood rape.

Meanwhile, Wallace’s two friends attempt to track him down with the help of detective Frank Garmin (Johnny Depp) who has been seeking Howard for years. He refers to his target as “The First Wife” killer in how he tortures his victims for years, a joke he remarks that only those who have been through multiple marriages would understand. These scenes of slowing tracking down the path of Wallace go on for way too long in moments that never seem to end. He orders a multitude of food at a diner while explaining the killer to Wallace’s two friends. While questioning witnesses at a gas station, he remarks how he picked up on the classic last-message-of-a-paper-pad clue from The Big Lebowski. Perhaps Kevin Smith believed that Depp had enough onscreen charisma to chew the scenery, but he can’t do much with such ho-hum dialogue and a ridiculous French-Canadian accent. His shabby clothes and long mustache make him appear as a hipster version of Inspector Clouseau.

And so the film switches back and forth between two different films. Michael Parks continues to lament on his dark days of befriending a walrus while Justin Long flops around in a meaty sleeping bag. Johnny Depp burns some of the running time with his lame jokes and strange manner of conversation. In either case, Parks and Depp are given far too much screen time as the star talent with not much to work with here. The walrus scenes are not as shocking or horrific as they were probably intended to be either. Smith seems to suggest an air of comedy as when Parks dawns a walrus costume as well to do battle with the walrus-transformed Long as if they were in those bulky sumo suits. They struggle to smack and bash each other with their head and tusks in a truly pathetic and confusing sight.

Mimicking Smith’s Red State, Tusk has all the same potential and all the same problems. It features great actors putting their all into an unfocused script with overlong dialogue. It has an intriguing setup for a monster movie, but never ascends past B-movie territory. I can at least say that I’m pleased to see Smith stick with taking his directing career in a vastly different direction. But if his quality never passes the bars of Red State and Tusk, I may find myself growing just as tired of his horror as I did his comedy. Smith is already at work on carrying over some of these characters in his next film and eventually a third in the trilogy. Strike one.