Rent Pirates of the Caribbean: On Stranger Tides (2011) 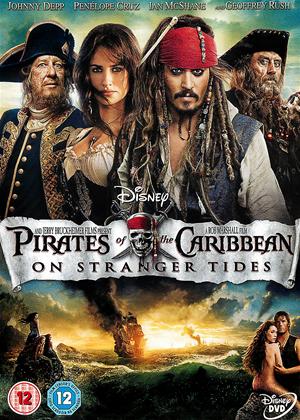 Rent other films like Pirates of the Caribbean: On Stranger Tides

Reviews of Pirates of the Caribbean: On Stranger Tides

Pirates of the Caribbean: On Stranger Tides review by Alyse Garner - Cinema Paradiso

The most recent offering from the Pirates of the Caribbean series continues the epic adventure tale of Captain Jack Sparrow (Johnny Depp) and his beloved ship The Black Pearl.

This film picks up where the last one left off; Jack has managed to get his hands on a map that leads the way to the fabled Fountain of Youth. He finds himself roped into helping recurring character of the series Captain Hector Barbossa (Geoffrey Rush) to lead an expedition at the behest of George II (Richard Griffiths) to get to the Fountain before the Catholic Spaniards get there.

Jack escapes Barbossa and the King’s men and is briefly reunited with his father (The Who’s Keith Richards) who warns him of the tests and trials he must face in order to find the Fountain. It also turns out that someone has been gathering sailors pretending to be Captain Jack. The impostor turns out to be Angelica (Penelope Cruz) a former lover of Jack’s and also the secret daughter of the infamous Blackbeard (Ian McShane). Jack then finds himself stuck in a race between Blackbeard and Barbossa to reach the Fountain. Along the way they come across Mermaids and ancient voodoo magic.

Jack discovers that the water of the Fountain is cursed as part of its ritual is that it must be drunk by two people at once, one of whom will have the youth pulled from them whilst the other will gain their lost years. Jack’s secret love for Angelica forces him to make a decision to save her life.

As the Pirates films go On Stranger Tides is better than the previous film, At World’s End, which was overly complicated and exceedingly long. However to say that this film is better than a previously terrible film is hardly a compliment. The film was adequate and even occasionally funny. However once again it was far too long and the story hardly strong enough to hold attention for the expanse. The action sequences are impressive, as you would expect from any huge Disney blockbuster but the characters are dull, Sparrow even beginning to loose his spark, and the story – although more straightforward than At World’s End is tedious and predictable. Despite this however, the huge box-office revenue garnered by the film will doubtless lead to a fifth film in the near future.