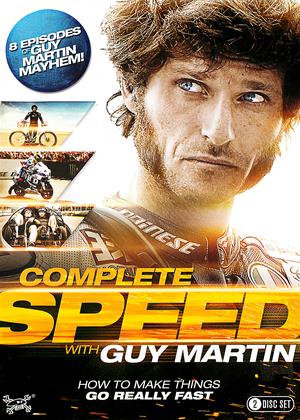 Synopsis:
Motorcycle racer and lorry mechanic Guy Martin loves pushing the boundaries of speed in search of a buzz. He loves the adrenaline rush of racing on public roads around the Isle of Man TT course at 200mph, and now he's setting out to find if anything else can give him the same kicks - while breaking some records along the way. Follow Guy as he takes on eight challenges that will test his bravery to the limit, from trying to ride a bicycle at 100mph to seeing if he can fly using nothing but pedal power. He'll learn about the science of speed, get his hands dirty with some unique engineering projects and seek help from famous record-breakers to help him in his challenges.
Actors:
Guy Martin, Sebastien Loeb, Scott Moran, Laura Trott, Bobby Unser, Cameron Whitworth, Guy Westgate
Directors:
Ewan Keil, James Woodroffe
Producers:
Ewan Keil, James Woodroffe
Narrated By:
Shaun Dooley
Aka:
Speed with Guy Martin
Studio:
Dazzler
Genres:
British Films, Documentary, Sports & Sport Films, TV Documentaries
Countries:
UK

Sign up
Guy Martin: Last Flight of the Vulcan Bomber

Having loved Guys enthusiasm for everything he does in previous documentaries, I rented this speed boxset not really knowing what it was about but purely on a Guy binge.

I never realised the guy set so many world records during this series, and was amazed to see the dedication he had to every task, they weren't all bike related. Fastest hovercraft, fastest sled, human powered plane and then on 2 wheels fastest motorbike, fastest tandem and amazingly fastest cyclist. I never thought he'd manage it being that motorbiking isn't as hard on the quads and cardio system as cycling but 'by eck' he gave everything his all. I won't list what records he set as he does fail at some and it would spoil the show.

There's excellent detailed analysis of each of his missions from engineers, scientists, experts with diagrams to show issues they overcome and keys to success. A great Guy series again.