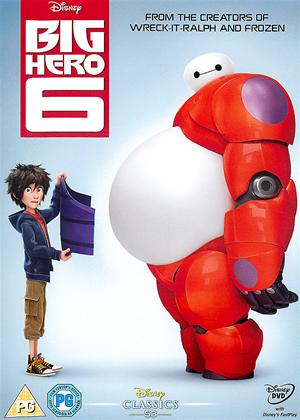 What a great family film, its been a while since I watched a cartoon this good.

An excellent watch and loved every minute of it

I loved this movie.

It is a lovely story, slightly different from the latest Disney. I found it a little bit darker, so maybe not very suitable if your children are very

I will recommend it especially if you are a manga/anime fans, as there is a strong Japanese influence in the characters.

Very clever cartoon for all the family. Does have the slightly odd Japanese facet to it, that their films and humour have. The blow up robot is certainly novel, and basically takes the film of course............have to give it 3 as gave Puss in Boots 4 and Shrek 5, so has to be relative............

If Marvel’s The Avengers appears a little too rough and tumble for the young ones, Big Hero 6 is the family special for the superhero genre. It probably won’t garner the exact level of popularity being based off such an obscure comic book of the Marvel Comics stable. It does little to separate itself from the current crop of superhero origin movies. In fact, it pretty much goes by the book while skipping a few steps to keep everything light and breezy. But, on that level, Big Hero 6 does manage to wrap the Disney charm around a fairly standard story.

Taking place in the futuristic fictional city of San Fransokyo (San Francisco with an anime makeover), the young Hiro Hamada (Ryan Potter) is a technological prodigy with a punk mentality for back alley robots. He finds a future for himself, however, meeting a gaggle of friendly nerds at a science school. It is there that he shows off his uncanny design and skill with nanomachines. But just after he is accepted to a school for his knowledge, a tragic explosion takes away both his mentor Prof. Callaghan (James Cromwell) and his brother Tadashi (Daniel Henney). Many months later and Hiro is still sulking in his room with his only companion being his brother’s last major invention: a robot with an inflatable exterior by the name of Baymax (Scott Adsit). The robot is supposed to assist him with his medical needs, but is more of a curious klutz attempting to better understand Hiro’s plight.

Baymax is going to have to adapt quickly, however, as his nano-machines have been found and reactivated by a sinister figure donning a kabuki mask. After this frightful discovery is made at an abandoned factory, Hiro takes it upon himself to beef up his pudgy balloon bot for battle. He builds him some tougher armor to protect his delicate inflatable structure seeing as how Baymax previously had to make some tape-based repairs when his skin sprung a leak. Hiro downloads some fighting moves into his pal’s processor right next to his personality card written by his brother. Baymax’s personality card prevents him from harming humans, but not furniture and boards of wood that he can easily decimate. Even the fine art of the fist-bump is instilled within the robot so that he has a victory celebration. While Hiro is more concerned with Baymax becoming a warrior, Baymax himself is drawn more towards how to help Hiro cope with loss. He believes all this superhero training will aid in the grieving process (along with lots of hugs and friends).

After another run-in with the nano-machine-wielding bad guy, Hiro realizes he is going to need some more help. And his new group of friends seem more than willing to let Hiro give them a superhero treatment as well. The manufactured superpowers that he bestows upon them are nothing all that unique as far as superheroes go. The bad girl Go Go Tomago (Jamie Chung) straps on some super roller-blades that double as Tron-like flying discs. The perky chemist Honey Lemon (Genesis Rodriguez) is equipped with a special purse that creates all sorts of elemental grenades. The nervous Wasabi (Damon Wayans Jr.) is given laser-powered blades on his arms that can cut through anything (maybe not the best weapon to give to a guy who freaks out about everything). And the slacker dude-bro Fred (T.J. Miller) is placed inside a monster suit that emits flames. Together they use their powers to solve the mystery of who is behind the reactivation of the nano-machines and what they want. They could just go to the police, but they’re portrayed reluctant enough so that there can be a superhero story.

While this film is not on the same level of Disney’s previous efforts or even the much-admired The Incredibles, it does pack enough energy and spirit. There are a few twists thrown in as when the group explores a dead factory and make some startling discoveries that led to the origins of the true villain. There is plenty of slapstick humor present which seems like a given for an animated action picture. And you can’t help but fall for Baymax’s adorable heart and tone. His voice is calm and gentle in the way he ventures into territory he really shouldn’t. At one point Hiro attempts to shut him up as Baymax won’t stop describing puberty to the growing teenager. The physical mannerisms of the blow-up bot also pack plenty of comedy in everything from his aimless direction of following butterflies to making his way drunkenly up the stairs on a low battery.

Big Hero 6 makes up for its lack of better character development in a script with plenty of heart and smarts to compensate. Any film that favors a let’s-build-stuff mentality and a surprisingly non-violent scenario for a superhero tale is certainly worth watching. In a cinema world where superhero flicks seem to be getting more grim, Big Hero 6 is a much-needed burst of color and fun to an otherwise violent and dark subgenre. We need a film like this to remind us that superheroes are still for kids and that you can craft an animated film for them without loads of grit and cliches. It’s a solid choice for the family oh-so-desperate to celebrate comic book superheroes, but are not quite ready for the PG-13 experience.