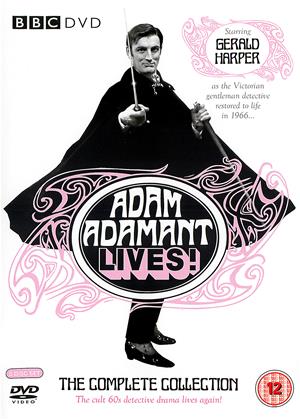 In a blatant attempt to rip off ITV's huge hit "The Avengers", Verity Lambert, producer of the BBC's even huger hit "Doctor Who", tried to combine whichever elements of both shows kinda sorta fitted together, and managed to pick the worst possible combination. "The Avengers" worked because its absurdly "square" hero's partner was a swinging sixties with-it woman whose skills complemented his own, and they made a superbly effective team. Here, the even squarer hero, who is literally living in the past, is stuck with a much younger woman who, far from being an equal partner, is a daffy pixie who follows him around when he doesn't want her to (in one episode, she follows him to Japan!) because she's hopelessly in love with him, does the exact opposite of what she's told, especially when it's clearly a very bad idea, is much more trouble than she's worth, and usually has to be rescued.

And whose brilliant idea was it to give the show's fairly young target audience a hero who detested everything that made the sixties swing, especially anything to do with women thinking for themselves and being openly sexy, along with pop music, immodest fashions, modern furniture, and anything made of plastic? The poor guy is actually repelled by sexy women, and literally cannot look at a girl in a swimsuit! What's more, his independent, rebellious, and underfed-looking sidekick Miss Jones (remember, this was the era when the gold standard for female beauty was someone called Twiggy), who runs a disco, wears miniskirts (as well as any other sexy outfit they can find an excuse to stuff her into, including a Bunny Girl costume and a wet fishnet body-stocking), and is so kooky that her catchphrase is "Zoinks!", almost always screws up and needs our hero to save her. Whereas AA is constantly implied to be right because he rejects lax modern morals and clings to the values of 1902. Also, he's a little bit too enthusiastic about killing people, and some of the deaths and injuries border on the sadistic - especially an almost unbelievable scene where a woman gets a spiked running-shoe embedded in her face!

Apart from a few very early and very late episodes, the stories are painfully formulaic, in a way that worked for "Doctor Who" because he could pop up anywhere in space and time and anything could happen, but not for AA because every week he had to fight slightly weird crime in England (except for that one time in a studio set representing Japan, which probably only happened so that Miss Jones could dress up as a geisha). Something bad occurs, the police are baffled despite howlingly obvious clues, AA investigates with no back-up except Miss Jones, who he specifically told to keep out of it, she gets captured, he gets captured, the baddies fail to kill him when they really should, he escapes and stabs the baddies to death with his trusty sword-cane, The End.

An extremely belated attempt to resolve issues raised in the first five minutes of episode one in the most predictable way imaginable, and introduce a recurring villain who looks and sounds like an evil puppet who would be more at home on "Thunderbirds", came too late to save it from a thoroughly deserved cancellation. The hero is almost as unsympathetic as an opening sequence which makes him look like Jack the Ripper leads you to expect. His ever-hopeful wannabe girlfriend is annoying. And the only other major character, a butler who's supposed to be funny, is a profoundly creepy waste of space. AA's most important legacy is that Jon Pertwee pinched a lot of his schtick when he was the third Doctor, and did it far better. If you're feeling nostalgic, watch that instead. Or "The Avengers". Or anything else which ever got a sequel or reboot, or lasted more than two years, because you can see why this didn't.