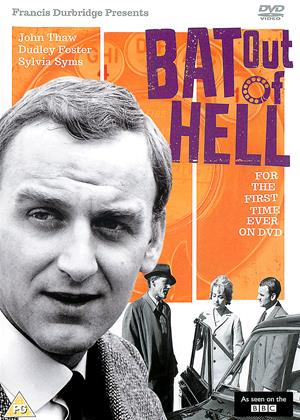 Sign up
Filthy, Rich and Catflap: The Complete Series

Reviews (1) of Bat Out of Hell

Nothing to do with Meatloaf, thank goodness! - Bat Out of Hell review by Count Otto Black

This extremely silly thriller occupies an odd no-man's-land between gritty modern crime dramas and Agatha Christie's genteel country house whodunnits. Though to be strictly accurate, it's not so much "whodunnit?" as "who didn't?", with just about the entire cast getting mixed up in the murder that happens five minutes into episode one, some bonus murders that happen later on, or various other bits of criminality, though of course some of the suspects turn out to be red herrings.

Obviously inspired by the superb 1955 movie "Les Diaboliques", it starts off in very similar territory, with an unpleasant husband being murdered, only for doubts to arise almost immediately as to whether or not he's really dead. Luckily for people who've seen "Les Diaboliques" (and if you haven't, you really should), it soon goes off in several other directions, though the theme of confusion as to who exactly is dead at any given moment is revisited somewhat implausibly as the story progresses.

Depending on your age, the name "John Thaw" immediately conjures up one of two tough coppers: Jack Regan from "The Sweeney" or the much better behaved Inspector Morse. So it's a bit disconcerting to see him playing a slimy, murderous, upper-middle-class estate agent. And since he's by far the most important character, it's a pity that he's so completely unlikeable. He also seems very stiff at times, probably because the part requires him to suppress his natural accent and do it all in rather posh BBC English. In fact, there are no genuinely likable characters at all, other than people who aren't on screen long enough to make much of an impression. Even the policeman trying to sort it all out is excessively cold and merciless, though to be fair to him, almost everyone he ever talks to apart from other policemen seems quite likely to be a murderer, and several of them are.

On the plus side, if you can forget how daft some of the plot-twists are, and ignore the way that absolutely everybody seems to be involved in multiple crimes that coincidentally just happen to tie in with one another, it's actually a very ingenious fast-moving thriller that, because of its episodic format, has a duty to surprise you at frequent intervals which it fulfills admirably. It's dated and wildly implausible, but in its own way, it's a lot of fun, and compared to most other BBC productions of the time, nowhere near as creaky as you think it's going to be. Well worth a look if you forget the hype about it being a neglected masterpiece and just want a decent murder mystery that doesn't drag.