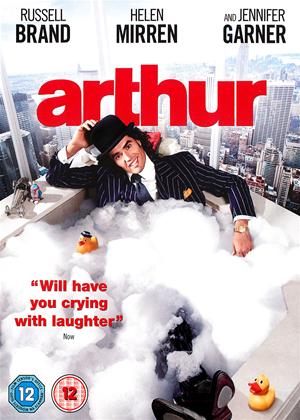 Was the 1981 original ‘Arthur’ starring Dudley Moore a romantic comedy? From what I’ve seen it was dubbed a screwball comedy with a glint of love story in it. But in 2011’s ‘Arthur’ remake with Russell Brand taking on the titular role, it seems the gist has been totally changed. It’s a full-on romantic comedy with a male lead; that’s quite a rarity in Hollywood, but with all the supposed ‘changes’ like Helen Mirren playing the Oscar-winning role of John Gielgud as Hobson, now a nanny when it was a butler before; making Arthur more of a drunken man-child rather than a drunken lovelorn; and a younger British actor, Brand for Moore in its lead, 2011’s ‘Arthur’ seems a remake uncalled for.

How unfortunate that a classic like Dudley Moore’s ‘Arthur’ would be reduced to something as forgettable as Russell Brand’s. Whereas Moore was lovable and charming in his version, Brand is just all over the place, hamming it up to the point of annoying. No wonder his mother wants him to grow up and get with the program: marry a wealthy heiress so his and hers wealth will be a hundredfold. Or, lose his inheritance and be a poor, drunk playboy instead. It also doesn't help that Jennifer Garner who plays Brand’s intended is too over-the-top to be a high-society shrew. Even her dimples won’t endear her to the audience, so when Greta Gerwig shows up as the commoner New York tour guide who captures Arthur’s heart, you’re made to root for this rival more than Garner.

‘Arthur’ could have been Russell Brand’s vehicle for showing off his range but he fails because he can’t help himself. Everything he does must be grandiose, must scream ‘Look at me! I’m funny HAHA!’ and the effect is somewhat a dud. I’m not saying the original ‘Arthur’ with Dudley Moore is such a comedy classic that doing your version of it is sacrilegious. But when you remake an old movie, make it count. At least Moore’s ‘Arthur’ had Christopher Cross singing its love theme called – you’ve guessed it – ‘Arthur’s Theme!’