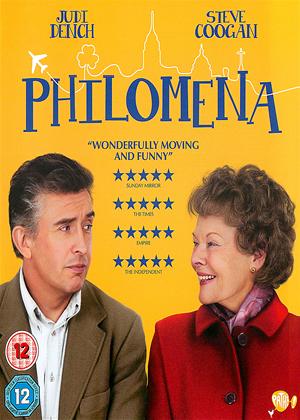 This is a great film, that tells the story very well, of a mother trying to find the lost son she gave up for adoption when he was a baby. She hires a reporter to help her find him . A story worth watching .

Got this for the wife to watch but I also enjoyed it good to see Alan partridge in a straight role and Jodie Dench is great. Good general film.

Worth a watch - Philomena review by CP Customer

I really enjoyed this film. Although it deals with a pretty depressing subject it does so with a light touch and is quite amusing in parts. Coogan and Dench are very good in it.

Steve Coogan ( I think he is a much better actor than a comedian) and Judy Dench were outstanding. Did have me in tears because of the true story But one of the best films I have seen in ages

This was the second time of watching and my wife and I enjoyed it very much. Although it was a very serious topic based on a true story it had a nice brush of humour.

Based on a true story this shows how terrible it was for mothers with children born out of wedlock in Ireland. My blood ran cold at times as it became clear how mothers and children were treated. Many amazing quips from Steve Coogan whose character was quite simply furious at the treatment of vulnerable people by individuals in a position of power. Dame Judi Dench playing a lady who had had her education and youth stolen was enlightening.

I really liked the extra interviews telling you what parts of the story were hard facts (the important parts basically).

Another major cover up. One of hundreds over the years. True story, and one of many...........Coogan actually does quite well, especially as is up against a deserved dame.

A superbly told true story with a spellbinding performance from the wonderful Dane Judi Dench and an equally impressive Steve Coogan, who shows that he can deliver a believable and serious role away from his usual comedic roles and characters.

The film captures what is a terribly sad true story, beautifully and is deliver in a way that really pulls you into the feelings and thoughts of not just Philomena but also the journalist. The relationship between the pair weaves in well with their separate desires to discover the truth and the various paths along the way, that culminate in a very heart wrenching and thought provoking conclusion.

A triumph of a film!

I knew going into Philomena that I would like it. After all it stars Judi Dench and Steve Coogan and it tells the true and incredibly personal true story of the titular Philomena (Dench) as she strives to find the son that was taken from her over half a century ago.

However the film mainly follows Martin Sixsmith (Coogan), a British spin doctor who finds himself fired from government and trying to find his way after his unceremonious dismissal. When he is told Philomena’s story he sees an opportunity to reinvent himself through their investigation as they travel to Ireland and Washington DC to find the truth of what really happened to Philomena’s child.

Hailed as the film to beat at the Baftas this year, Philomena definitely lives up to the hype as Dench and Coogan compliment each other with their very different personas with Philomena being a gentle hearted Irish woman who has spent years repenting for her perceived sins and Martin being an aggressive atheist, an angry man with good reason to be.

The film while based on a search for family is really a discussion of faith and it handles this search for identity through religion with care as Martin and Philomena find themselves trying unintentionally to persuade each other one way or the other. In fact director Stephen Frears (High Fidelity) uses the films delightfully subversive script (Cowritten by Coogan) to emphasises one key element of the film that differentiates Philomena from all the other emotionally dense films of its genre. Martin and Philomena are never really close, they never connect in the way you would expect and while some may be offended or think the film lacked that bond it adds a sense of reality, an idea that these two people are performing a task, a task that while mutually beneficial doesn’t meant they have to like each other.

The film gets some of its best moments from the sense of debate between the two and without it the film would be dead in the water. Clever, bittersweet yet heartwarming at the same time, Philomena is easily the best British film this year and it would be hard to beat when the Baftas finally do come around