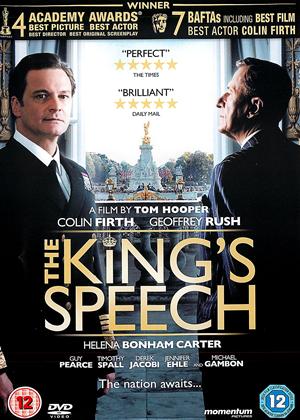 Reviews (7) of The King's Speech

This film is excellent - intelligent, well-acted and beautifully filmed. OK so it's a shame that the Americans only like British films if they're full of royalty and corsets and plummy accents; movies like Shallow Grave and Trainspotting were equally worthy of Oscars. But anyway...

A couple of historical inaccuracies in the mopvie though: the austere Queen Mary was a big reason for Bertie's stutter - the film blames George V his father entirely; also George V was actually 'put down' when on his death bed so his death would be in time for the Sunday papers deadline - they didn't show that. Neither did they show how George VI's speeches were edited (on metal discs) before broadcast to edit out the stuttering bits!

The most irritating thing though is when, half way through, Bertie says 'Excuse me' to the David character. NO NO NO! That is the American usage of the phrase 'excuse me' the British Engloish would have been 'I BEG your pardon?'! They got that SO wrong. No-one is the UK says that now - and certainly wouldn't in the 1930s! Some more language tics of the time would have been good too - and I don't believe the Queen Mother would have behaved as Helena B-C does!

But, all in all, one of the best British films of recent years; Colin Firth gets the accent just right, especially Bertie's R sound, not to mention the huge pressure on the man and his courage (and the courage of all stutterers). Rush is perhaps even better.

The most emotional part of the film though is hearing Chamberlain's declaration of war on Germany. People always forget that if the British had not stood up to Germany, the world would be completely different now - the US would have done a deal with Hitler for sure. Anything that reminds the world of that is good in my opinion.

A magnificent film with all round excellent performances.Colin Firth must win the Oscar for this.Is this the first positive portrayal of a stutter ever? You get a strong sense of the Kings agony and discomfort, yet appreciate his bravery to face up to his responsibilities.Unlike some modern films which tend to give characters from the past an emotional range which they didn't and couldn't possess, this is true to life, and shows rather well the growing friendship between KG and his speech therapist. I know that sounds quite unappealing as a premise for a film! Its almost irrelevant that its about the royal family actually- I love the fact that the film is claustrophic with the world outside icy and cold, to reflect his buttoned-up life, and his difficulties in communicating.A film to enjoy again and again.

Well its been awarded a few gongs and for no other reason than its a great film which has warmed me to a couple who went through their own trying times to come out successful, the film if accurate shows what a genius and totally ordinary exceptional man Lionel Logue was and again in life just goes to prove that you don't always have to be the best educated certificated person to be a success in life what compassion and friendship this man exudes and i should imagine that it would be nice to have Mr Logue around to dinner.

Oh about the film one of the best ive seen and would want to watch again, funny heart warming cringeingly wonderful at times and a feel good factor, it will survive as a period piece and to anyone in the western world who hasn't seen it please do British film at its best...............enjoy

A rewarding experience - The King's Speech review by CP Customer

This was an excellent portrayal of an admirable story. It is easy to understand the many accolades and awards bestowed upon this production. They are all very much deserved.

An absoloutely wonderful story told with affection and acted brilliantly by an all-star cast! Loved the bonus parts too which helped explain the true story.

Must see - The King's Speech review by CP Customer

Wonderful acting, great period settings and a strangely compelling storyline. It is easy to see why this film won the awards that it did.

You could be forgiven for thinking a film about someone with a stutter could be very boring but far from it. The on-screen relationship between the King and his speech therapist is superbly portrayed with two exceptional acting performances by Colin Firth and Geoffrey Rush. It’s a fascinating relationship between the two, that at times is fraught with anger and frustration but ultimately excels because of the compassion and respect that both have for each other. Splendid film!!

So far 2011 has been quite the year for the British Royal family, and now days after the big wedding the story of Prince William’s ancestor is released on DVD. As many will know the film stunned both audiences and the Academy at this year’s Oscars and BAFTA’s and has been a real point of pride for the UK Film Industry.

The film tells the story of King George VI, known to those close to him as Bertie. The younger of two brothers’ Bertie never expected to find himself head of the country however his elder brother’s choice to marry American divorcee Wallis Simpson finds him thrust into one of the most important and prominent positions in England.

The film’s title refers to one of King George’s most famous moments: 1939’s Declaration of War Speech, which roused the British people upon their entrance into the Second World War. However the majority of the film is spent building up to Bertie’s greatest moment and deals with the impact Bertie’s speech impediment will have upon him.

Having already been subjected to many an impatient and impotent speech therapist Bertie is on the brink of submission when his wife Queen Elizabeth, now affectionately known as the Queen Mum, stumbles across an unorthodox Australian named Lionel Louge who himself suffered with speech difficulties as a child. Having overcome his disability Louge has taken to helping others with their stammers and it is his relationship with the King that drives the narrative of this beautiful Royal drama.

Beginning as a troubled and stubborn man the film displays a touching and tentative performance by Colin Firth as he grows into a strong and confident leader. Firth’s portrayal of the royal was noted by disabled activists for its compassionate and empathetic nature, and it is this that largely makes the film the excellent piece of cinema that it is. The King is shown to be loyal and caring as well as stoic and strong willed:

The film peeks and troughs emotionally, allowing us a privileged insight into the pressures of a King, yet its touching nature never yields; and leaving the theatre I felt almost moved to tears at the sight of Bertie’s triumph. It somehow seems to speak for the British nation as a whole and reminds the rest of the world why we still proudly herald the Crown.