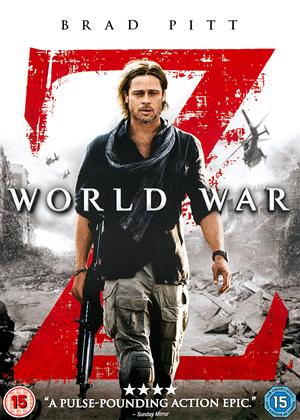 A zombie plague sweeps the world. Only Brad Pitt has the skill to find the cure. Err, that's it.

While it has tense moments, there is far too much rather obvious CGI special effect work and the 'zombies' are far too much like the Rage-infected critters from '28 Days Later'. In fact it's just too derivative for its own good.

It's not a bad film, but the only originality it shows is the use of British locations and a world-wide scope, which in an American film is somewhat unusual. Here the action switches from the US to Korea to Israel to Wales.

Don't watch it if you're looking for gore or entrail-ripping - it's far too wimpish for that. In fact I reckon it should be called 'War World W' - W for Wimp, that is...

Pretty average stuff, and although there are some tense bits I can't give it more than 3/5 stars.

Did I like it - World War Z review by JL

It had more of a story line and I liked it

Simply put, Brad Pitt did his best but all the way through the movie didn't quite gel. It wasn't gory enough to be a horror, yet the plot wasn't strong enough to be a thriller so all the watcher was left with was various action sequences 'stitched' together with a thinly stringed story line. If action and stunts are your thing, you'll not be disappointed, but if you are also wanting something with a reasonable script/story line this is not for you. A shame really, the idea had so much more potential.

Good to see Brad as a bit of a fumbling fool in a film rather than someone who knows what is coming around the corner. For a zombie flick this is a good one of the bunch. Don't expect too much just switch your brain off and tunr on some chewing gum for the eyes. Expect lots of zombies, general gore and outrageous actions that clearly nobody would survive.... but do (Or do they).

Although this is basically a contemporary zombie film its not really a horror genre piece but more of an action adventure and mightily entertaining it is to especially as, wisely, it focuses on being a character based narrative but with some stunning set pieces thrown in. Brad Pitt, who also produced, stars as Gerry Lane, loving husband and father to two daughters and former U.N. Special Investigator. He's left the hectic world where he had a reputation for being able to root out the truth in some very dangerous situations and now concentrates on being a family man. But when a worldwide virus spreads rapidly turning infected people into rabid zombies that attack on sight he is called back to help find the cause. His journey takes him to South Korea, Jerusalem and Wales in his effort to find the answer to controlling the virus. The set up is exciting and the film wastes no time in getting straight into the story. It's tense and maintains suspense throughout. The outstanding set piece is the fall of Jerusalem to the zombie hordes and the zombies in this film aren't your shuffle along types these run full tilt at you and en masse too. The final third of the film is set in a W.H.O. facility in Wales where Gerry has to sneak into a laboratory inhabited by zombies, a tense closed in part of the story that plays like an espionage film. In the mix is gunplay, a plane crash, nuclear explosions and some very eerie undead to contend with. This is cracking good fun with plenty of action and excitement and even if zombie films aren't usually your thing give this one a try, you're guaranteed to enjoy it.

Everything seems to be doomed - World War Z review by PE

Not much of a story line but plenty of action. Everything he tries ends up as being doomed to failure and this eventually becomes monotonous and lacks credibility. A very average film.

That was a joke. Please please don't watch this film. Please just watch 28 Days Later again, even if you have seen it a thousand times. It is infinitely better.