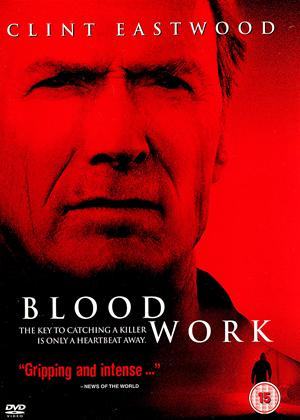 This is no turkey! - Blood Work review by CP Customer

I cannot understand why this movie bombed at the box office. With Clint Eastwood starring & directing & with an excellent book my Michael Connelly (The Bone Collector), it should have been a surefire winner. I thought Clint made a good job, both directing & acting, & for the most part, stuck to the plot in the book.

Competent cop thriller, in which Clint Eastwood plays Clint Eastwood getting his man and the girl. It's routine stuff with a silly plot, but quite enjoyable. It's also one of the few films either starring or directed by Clint Eastwood that somehow I hadn't seen before.

The (silly) plot goes like this: cop (well, FBI profiler) is invalided out after a heart attack. A couple of years later he gets a heart transplant. It turns out that he has received the heart of a murder victim. The donor's sister asks him to track down the killer. Retired cop finds that a serial killer is at work and that the killer is stalking him. Retired cop identifies killer using a series of telegraphed clues and gets his man.

It is well directed and acted – as we would expect from Mr Eastwood. The thing which jarred with me was grizzled 70+ year old Clint having a romantic encounter with a 40+ year old woman (at least that's the age of the actress – the character she plays is probably supposed to be younger). Talk about cradle snatching :) And the clues are pretty obvious – I don't think it's the kind of film you could watch over and over.

Despite the flaws I enjoyed it and rate it at 3/5 stars.