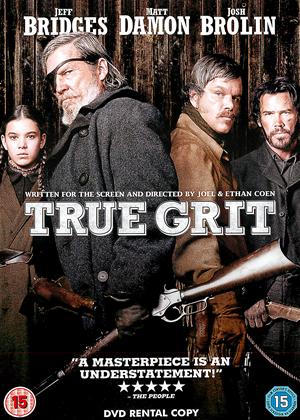 Even if you don't like Westerns, see this – I think you might enjoy it - True Grit review by RP

I originally saw this in the cinema and enjoyed it. Having watched on DVD a number of pointless film remakes, watching 'True Grit' again allowed me to reflect a little more. The original 1969 version with John Wayne was – and still is – a classic, and won him an Oscar for Best Actor. Is the 2010 remake as good, or better than, the original? Well, no it's not. It's good, but not that good, and perhaps that's why it didn't win any Oscars despite 10 nominations. But what makes the film is the excellent portrayal of young Mattie Ross by the then 13 year old (!) Hailee Steinfeld. Jeff Bridges has had plenty of practice playing scruffy layabouts and he slipped easily into the role of Rooster Cogburn. But Hailee Steinfeld handled a difficult, wordy role with an ease beyond her years.

I said the film is wordy... there is a lot of dialogue here, so listen carefully. Even if you don't like Westerns, see this – I think you might enjoy it. Recommended - 4/5 stars.

Like the other reviewers I turned on the subtitles for all of Bridges otherwise excellent grumblings. Matt Damon comes off his super hero pedestal for a cracking fall guy performance. This is on a par with Django for comedy but much less violent. really sorry to see the final credits.

Less a remake of the 1969 film but a new adaptation of the source novel and a lot closer to it. In the hands of the Coen Brothers this is a particularly interesting and commendable film (garnering ten Oscar nominations, although winning none). It's always tempting to compare to the John Wayne earlier version but viewers should try to avoid this as far as possible. There are similar scenes and the story arc is approximately the same but the Coens have created a revisionist style and combined it with a mystical journey narrative. As soon as the main characters cross the river on their hunt they enter a land of strange characters that can be viewed as almost fantastical and Jeff Bridges is their guide. He plays Marshall 'Rooster' Cogburn, "a pitiless man fear don't enter into his thinking", who is hired by the headstrong fourteen year old Mattie (Hailee Steinfeld) to catch her father's murderer, Tom Chaney (Josh Brolin). The trouble is Mattie insists on going along too into the wild Indian Nation territory of Arkansas, a land inhabited by misfits and violent criminals. Tagging along is LaBoeuf (Matt Damon), a Texas ranger also after Chaney. The Coens have a skill at nuanced storytelling and treat their audience respectfully allowing the viewer to work out the issues as they play out. There is merciless violence here and the wilderness is reflected in the savagery of the characters. It's a film about death and an obsession with it, but it's also a film about passion, devotion and revenge and it's really a modern masterpiece. This is definitely a film to check out and if you fell into the trap of comparison with the first version because of your love for John Wayne then I urge you to give this another go, it's worth it and you will not be disappointed.

unfortunately no subtitles for the no doubt marvellous but entirely unintelligible performance of Jeff Bridges. a great film otherwise - if only they'd made in in English...

I think that the title says it all. It isn't a bad movie but it sure isn't John Wayne. It is almost more a comedy than a serious western (if that makes sense).

I found this an enjoyable film that kept my attention throughout. It helps that it is not overly long.

I put the subtitles on as soon as Jeff Bridges character appeared, without them I would have turned it off.

Joel and Ethan Coen put their stamp on the American Western with ‘True Grit’, a remake of the 1969 film starring John Wayne. Jeff Bridges takes on Wayne’s iconic character US Marshal ‘Rooster’ Cogburn and in her star turn, Hailee Steinfeld plays the young Mattie Ross, who hires him to find the killer of her father – outlaw Tom Chaney (Josh Brolin). The motley crew is completed by Matt Damon as Texas Ranger LaBouef, and though they relent to work together, they end up becoming a sort of ‘payback team’ anyway. Trouble is: Cogburn is a functioning, stubborn drunk who prefers to work alone, LaBeouf is dashing but lacks tracking skills, and Mattie is an adolescent girl – deemed weak and a liability for her age, even when she can be enthusiastic and quite the smartest in the bunch.

At first I was apprehensive with the idea that writers-directors Joel and Ethan Coen were tackling a remake. They are best known for producing original screenplays – Oscar winners even (ex: ‘Fargo’ and ‘No Country for Old Men’) – and to me, it felt like they were on their lazy chairs when they decided to make their own version of ‘True Grit’. I frown upon remakes because the adage ‘If it ain’t broke, don’t fix it’ exists for a reason. However, the Coens would want to change my mind.

And change they did.

With repeat collaborators Bridges (‘The Big Lebowski’) and Brolin (‘No Country for Old Men’) and the addition of Damon and Steinfeld, their chemistry proves to be the perfect recipe for a refreshing Western. The staples of gun-slinging, characters on horseback, cowboy hats, and that dang Southern accent do not cheapen its story. As far as revenge films go this is in the Top Ten. Perfectly cast as the movie’s protagonist is Hailee Steinfeld. What a trooper. Can you imagine having to star alongside experienced actors such as Jeff Bridges and Matt Damon? That could have been a very intimidating task. But Steinfeld holds her own even earning an Academy Award nomination herself. Truly, hell hath no fury than a 14-year-old girl scorned.