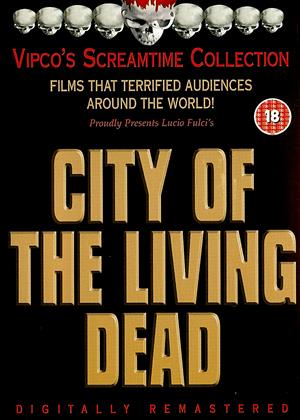 Sign up
Conquest of the Planet of the Apes

Reviews (3) of City of the Living Dead

This was so bad i couldn't bare to watch it until the end. The story is poor the acting is even worse and the script is dreadful . Please don't waste a rental on this film.

The narrative here is functional rather than anything to get excited about (the end in particular seems a little lacking), but in terms of style this film knocks it out of the park. Excellent inventive direction, rich gaudy colours, and a throbbing Goblin-esque soundtrack. There is a nod towards HP Lovecraft in setting the film in Dunwich, but this isn't really an adaptation, more a succession of stylish set-pieces. The dead themselves are also much more unique than the standard shuffling cannibal zombie fare, able to appear and disappear at will, and as likely to kill you by making your eyes bleed as try and eat you. If you like the films of Romero and Argentino, this will be right up your street.

I’m revisiting a few classics, this one from acclaimed director Lucio Fulci, City of the Living Dead, a horror movie that is the first in his Gates of Hell trilogy and one of his four zombie pictures. It features the trademark creeping “atmosphere of dread”, a fair amount of violence and gore, a simple (yet complex) plot and some dodgy acting which I happen to enjoy. Evil doings are afoot in the H.P. Lovecraft named small village of Dunwich, and the film opens with priest Father Thomas hanging himself without explanantion in the cemetery. This event is “seen” at a seance by medium Mary (Catriona MacColl), and alongside straight talking journo Peter (Christopher "The Exterminator" George), she realises that the death has indeed opened the Gates of Hell, and that the dead will rise to consume humanity on the fast approaching All Saints Day. Mary incidentally collapsed at the seance and was mistakenly pronounced dead and buried - Peter hearing her cries and pickaxe-ing open her coffin to save her. The duo decide to attempt to stop the upcoming evil event but they have trouble in first finding the village and while they are on their way all manner of unspeakable activities are going down there.

The typical Fulci schema is to have light and dark , dark and darker contrasts throughout and the film's score also adds to the tension (and relief) and the uncomfortable darkness throughout is shrouded in a misty atmosphere and interspersed with intense bouts of bloody violence and gore. These old classics, along with their pre-CGI precursor, are highly inventive in terms of camera angles and suggestion of violence before delivering the coup de grace, and the scenes are memorable , even if the gore is not quite at the standard of modern pictures: bleeding eyes, vomiting entrails, a maggot infestation are some of the treats in store. It also the way in which the film shifts suddenly into bloody and deliberately planned to shock violence: one such scene, involving a drill and a face, is infamous because it still unsettles despite the rudimentary gore by these days’ standards.

If judged only on horror atmosphere alone, it would be a masterpiece. However, the film does not quite hit the high bar that Fulci himself has set with other works. The plot is a tad manic and can be busy with too many sub-plots that can dominate and force the focus off the main story. Then we have the at times shoddy acting, which isn’t everyone’s cup of tea, and the final defeat of evil is far more simplistic than other battles with evil you will see. This said, this is Fulci and I do love the consistency of his work in leaving some sort of artistic impression after the film, be it atmosphere, score, camera angles, imaginative gore, you won’t forget this film in a hurry