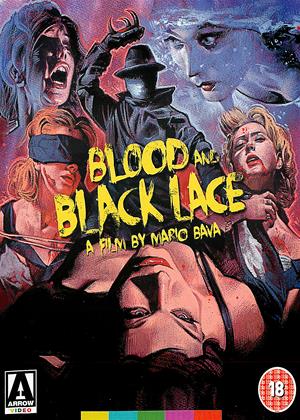 Reviews (2) of Blood and Black Lace

I wouldn't be seen dead in that outfit... - Blood and Black Lace review by Count Otto Black

Considering this is supposed to one of the classic giallos, I was somewhat underwhelmed by it. The story is rather basic: pretty girls strut around in revealing clothes, they misbehave a bit, they start getting murdered, the police are about as useful as a chocolate fireplace, and so on. And without giving anything away, when the reasons for their deaths are finally revealed, they come across as a wee bit too trivial to justify all the preceding carnage!

Talking of not giving anything away, one odd detail I found distracting was the way that the murderer, who wears a loose coat, a totally featureless mask which doesn't even have eyeholes, and never speaks, seemed to be going to a lot of trouble to avoid giving any clues as to their identity, or even their gender, even when there was nobody there except some poor girl who'd be dead in a moment, or already was. It's as if the murderer is thinking: "I'm killing models dressed as Rorschach's Evil Twin, which is kind of improbable. Hey! Maybe I'm a fictional character! I'd better not drop reveal who I am to this empty room in case there's a secret invisible camera, and hundreds of people who hate spoilers are watching this in a cinema!"

Some of the acting isn't too great either, making it hard to believe in and therefore care about these characters. Cameron Mitchell is dependably suave, but some of the girls are a bit wooden. I suppose if your character's main contribution to the movie is to be murdered while wearing transparent underwear, if you're a great actress you probably wouldn't have auditioned for that part. And by today's standards, it's not that gory for an 18. Perhaps a little more so than a Hammer horror, but not much.

In the end I found it strangely lightweight, given its subject-matter, and neither very involving nor the least bit disturbing. But it's quite lively, gleefully decadent, and it's a proper murder mystery with a proper masked maniac whose identity you can try to guess. It's not the masterpiece some people claim, but if you like that sort of thing you could do a lot worse.

This is a very early giallo film, and already makes really good use of what would become staples in the genre. Lurid colours (lots of blues and deep reds and mauves), lots of young ladies the victims of violent distress, a mysterious black gloved killer, and some briefly gory scenes.

It seems to me that Director Mario Bava’s eye for exaggerated colour palettes inspired films like ‘Suspiria (1977)’, and the music by Carlo Rustichelli also adds to the striking visual set-pieces.

A dazzling and gory production for its time, the story beneath is somewhat ponderous and something I found difficult to engage with. As with ‘Suspiria’, I found the directorial flourishes a distraction rather than an enhancement, although certain scenes undoubtedly work very well. The characters are somewhat drowned in the stylish presentation too, although the acting throughout is accomplished.