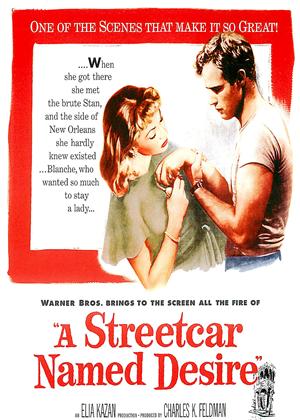 Reviews (1) of A Streetcar Named Desire

Tennessee Williams' American theatre classic was transferred to Hollywood by its stage producer Elia Kazan somewhat reluctantly as he felt he had achieved as much as he could with the play on Broadway. He was persuaded to direct by Williams, perhaps alarmed at suggestions that his great heroine, Blanche Dubois, was to be played by Bette Davis or Olivia De Havilland.

The play was controversial for New York, but in Hollywood it was a cause celebre. Streetcar was the first film to feature a jazz soundtrack, and the Catholic League of Decency successfully had some of it suppressed for being too sexy (it is pretty hot!). Language and insinuation formed battle lines. While the play is about changes in the American South, the corrupting nature of human violence, and the motivating influence of sex and death, it is just as true to say the play/film is about Williams' own heart, and he felt violated by the furore.

But his play survives remarkably intact (some censored lines have been subsequently returned to the film) and his script is pure gold. It is hard to conceive now what a great leap forward this was for Hollywood, in it's depiction of sexuality, making it a historically important production. Kazan took three of his main players to Warners with him, Karl Malden, Kim Hunter, who is superb, and Marlon Brando. Brando was a sensation. We'll never experience what a shock his performance was for audiences. Nothing like it had been seen on the screen before. I love Bogart, but it's crazy Brando didn't win the actors Oscar ahead of him that year.

The other three stars won Oscars (as did Kazan) including Vivien Leigh as Blanche (she had played a southern belle before!). Her and Brando's scenes are breathtaking. In this film, these actors made two of the great lead parts in drama their own. It is tremendously atmospheric. And it is the best cinematic work of everyone involved.