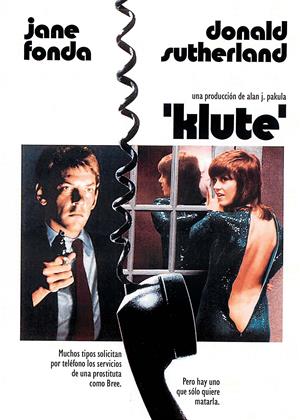 Highly recommended - but definitely 'of its time' - Klute review by RP

'Klute' is John Klute (played by Donald Sutherland), a cop acting as a private investigator, hunting for a missing Pennsylvania businessman who has disappeared leaving clues implicating a New York call girl, Bree Daniels (played by Jane Fonda). Klute strikes up a relationship, investigates a series of deaths and identifies the killer. Straightforward stuff you might say, but what makes this film unusual is its subject matter. 40+ years ago films dealing with a prostitute as the leading female character were few and far between, and Jane Fonda won a well-deserved Oscar for Best Actress. The film looks a little dated now, but is most definitely 'of its time' and gives a snapshot picture of 1970s life – typewriters, ringing telephones, 1970s hairstyles, fashions and dance styles etc. Highly recommended – 4/5 stars. [Aside: A Region 2 copy of 'Klute' on DVD can be moderately difficult to get hold of – my copy is a Spanish import. Although this is a genuine copy, the quality of the transfer to DVD is not high. But this could be explained by the film being over 40 years old...]

If you want to win an argument over how they really don't make movies like they used to then you can always offer up 'Klute' as an example.

Don't get me wrong I enjoy movies as they are made today but ... I can't help but feel they aren't really made for me. That is to say pretty much anyone over the age of 35; modern movies are fine but I'm always aware that my eye is being distracted by a fancy piece of graphics, or my emotions are being manipulated by piece of 'feature' soundtrack or a sense of excitement generated by some rapid editing. It was ever thus, but somehow there was a time when it was generally more subtle and lot less bombastic.

Klute is a movie where people talk to each other , where the camera is allowed time to linger on its subject , where not every thought is expressed and the actors are expected to be able to imply things by actually acting and the director assumes that you the audience are able to infer what is intended by watching that acting. The 70's , it seems to me was the last decade when 'adults' as a demographic was one that Hollywood consciously made movies for - I can't imagine Hollywood green lighting movies like 'The Deer Hunter' ,'Taxi Driver', 'Chinatown', 'The Godfather' or 'The Conversation' - which Klute has a similar feel too. So, I would certainly encourage you to watch this movie and enjoy it, not as curiosity of another time, but as great piece of storytelling.

Prospective viewers should note that this is the European R2 dvd which doesnt have English subtitles. Main audio can be set to English however.