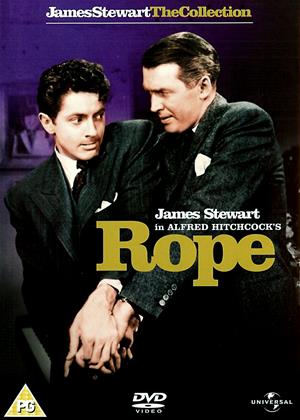 Synopsis:
James Stewart stars with Farley Granger and John Dall in a highly-charged thriller inspired by the real-life Leopold-Loeb murder case. Granger and Dall give riveting performances as two friends who strangle a classmate for intellectual thrills, then proceed to throw a party for the victim's family and friends - with the body stuffed inside the trunk they use for a buffet table. As the killers turn the conversation to committing the "perfect murder", their former teacher (Stewart) becomes increasingly suspicious.
Before the night is over, the professor will discover how brutally his students have turned his academic theories into chilling reality in Hitchcock's spellbinding excursion into the macabre.
Actors:
James Stewart, John Dall, Farley Granger, Dick Hogan, Edith Evanson, Douglas Dick, Joan Chandler, Cedric Hardwicke, Constance Collier, Alfred Hitchcock
Directors:
Alfred Hitchcock
Producers:
Sidney Bernstein, Alfred Hitchcock
Writers:
Hume Cronyn, Patrick Hamilton
Studio:
Universal Pictures
Genres:
Classics, Drama, Thrillers

Hitchcock's first colour film is a classic. Adapted with Hume Cronyn from Patrick Hamilton's play, in turn based on the Chicago killers Leopold and Loeb, it is one of Hitch's impediment films, set within the confines of a single apartment in long shots of typically about eight minutes, joined by screen wipes giving the illusion of a single edit over 80 minutes.

During WWII Hitch shot footage in a concentration camp and when he made it into a short film, he used edits as long as possible so hostile observers couldn't suggest he had changed the truth of these places through editing. This aesthetic was then transferred to Rope.

Some feel the idea was gimmicky, and James Stewart said it was a film about the camera, but I think it really works. It has a questing energy, and a claustrophobia that suits the material; the exposure of two sociopaths indoctrinated by eugenics and Nietzsche who kill an acquaintance who they consider inferior. It is Hitch's most philosophical work, brilliantly acted with a witty script. But what is foremost is the director's most original and complex staging.

The whole film is a tour de force, but among many spectacular flourishes the dramatic ending lingers longest, when Stewart fires shots out of the window and we hear the noise of a city ready to come to help, contrasting with the elitist intellectual solipsism of the murderers.

The subject matter is unpalatable. 2 men feel that they are of such superior intellect that they can murder an inferior man without moral impeachment. There may be generalisations relevant today but this awkward subject matter requires good acting of which this film is lacking. James Stewart is the exception but it takes more than one to keep a film going.