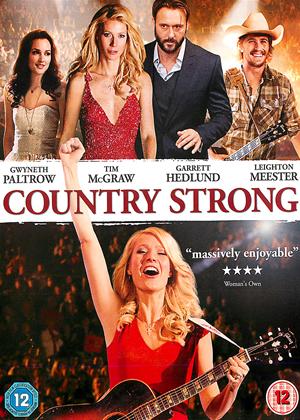 Kelly Canter (Gwyneth Paltrow) is a country star diva, selling out crowds and winning hearts across America – but she’s a vodka-swilling country star diva and after a misstep that caused her to miscarry the baby inside her, Kelly is sent to rehab. But not yet completing her treatment, her husband-manager James (real-life country superstar Tim McGraw, husband to country megastar Faith Hill) convinces her to start touring again, whether for the money or glamor of fans is suspect. Kelly agrees but not without her new fling, Beau Hutton (Garrett Hedlund).

Completing their motley crew of touring country stars is Chiles Stanton, a former beauty queen and rising singing star and maybe Beau’s new girlfriend, too. Kelly, James, Beau, and Chiles and their intertwined personal and professional lives are showcased in the movie ‘Country Strong’.

Directed by Shana Feste film intersperses concert footage, musical styling, and drama from its multi-talented cast. Although it’s no secret that Gwyneth Paltrow can sing, it seems a stretch to watch her turn into a Nashville country star. Paltrow hits the right notes as a country singer but when it comes to being a troubled alcoholic, that’s where she comes up short. As for her on-screen husband Tim McGraw, we can see why he cares for Kelly yet also unsure why. Garrett Hedlund and Leighton Meester introduce their singing prowess as well, but their presence although stunning do not exactly spice up or forward the movie’s plot.

‘Country Strong’ is a soap opera with country music as its official soundtrack; that’s well and good if the soundtrack is more the background than the star, and the drama is played out front and centre. As it is, it’s like a variety show with special guest stars that turn up with luckily a guitar and swag, ready to rock and roll and let us sing along. But the movie was marketed as something darker; Gwyneth Paltrow’s character is supposed to be an alcoholic. What we see is a character addicted to fleeting fame.