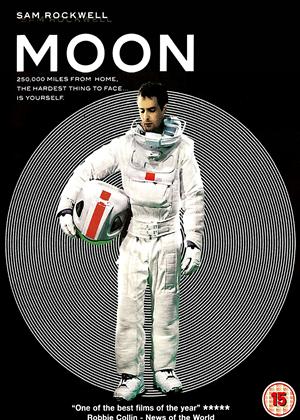 Original, intelligent and one of the best films of 2009. - Moon review by CP Customer

After the energy corporation ‘Lunar Industries’ finds a cost efficient way of mining the clean and abundant gas Helium-3 from moon rocks it solves the Earth's growing energy problems. As the lone employee the Lunar Industries mining station based on the far side of the moon, Sam Bell is on the last two week stretch of a three year contract and anxious to return to Earth and be reunited with his wife and daughter. His job entails overseeing the automated harvesting machines, which in an all in one process mine rocks from the moon’s surface, extract the gas, and compress into canisters which Sam periodically loads into a bay which rockets its precious cargo back to Earth. With a faulty communications system which only allows for the sending and receiving one way video messages Sam’s sole companion is ‘GERTY’ an artificial intelligent computer system which attends to his day to day needs. After a three year stretch of enforced isolation Sam has had time to reflect on his life, his troubled marriage and tackle his own personal demons, though the pressure of the solitude is now starting to affect him. Following an accident with a moon harvester Sam wakes up in the infirmary to find not everything appears as it seems and he soon begins to doubt his own sanity and true identity.

I really didn’t have many expectations for this film; I just rented it as it had a bit of media coverage for being directed by David Bowies son Duncan and had gained good reviews from critics, but I have to say this for me was one of the best films I’ve seen of 2009.

The design of the film is fantastic, paying huge homage to the look of films like ‘Alien’, ‘2001’, ‘Silent Running’ and TV shows like ‘Space 1999’, the 70’s retro modular white plastic set is visually stunning. The design of ‘GERTY’ is also very clever. Voiced by Kevin Spacey ‘GERTY’ is an intelligent computer system which can only exhibit basic emotions via a small screen which displays ‘MSN’ style emoticons. The subtle use of CGI reserved for exterior shots on the moon surface are high-quality and never over the top and the overall attention to detail towards the look and feel of the film really adds a huge amount it.

The film only has one ‘physically’ onscreen actor throughout the entire film and it takes a very special type of actor to be able to single-handedly carry a film for an entire 97 minutes, but Sam Rockwell does a phenomenal job. There are no showy over the top acting performances, just a gently paced portrayal of a lonely individual who has to face an unimaginable revelation that shatters the reality of his own existence. There are no aliens, no futuristic battles, no faster than light spaceships, just a lonely astronaut with only an impassive computer for company, and an engaging and intelligent storyline which will hook you in from start to finish. The actual twist in the story comes quite early on in the film and changes the film from what could have been a thrilling mystery into a quiet, thoughtful, moving and incredibly poignant tale.

Original, intelligent, well written and beautifully directed, this is easily one of the best films of 2009 and a future classic.

Why is there a moon base with only one guy working there? Is the friendly robot helper all he seems? What happens if anything goes wrong up there? Duncan Jones crafts an effective movie on a small budget, thanks to the excellent performance of Sam Rockwell. The reveal happens quite early, allowing for a gradual understanding of decisions and their consequences. Thoughtful, intelligent, and rewarding.

had problems running the dvd but looked online and found the solution, if it plays with the voice over commentary and you cant get it to play normally, when the film has just started playing press audio button on ur dvd remote two or three times. apart from that i enjoyed the film the whole way through.

One of the best sci-fi films I have seen in a long time. A small story, a confined and claustrophobic environment, a small cast (one actor – if that doesn't give too much away), but complex concepts and deep emotions play out here. It pays homage to 'classic' sci-fi films, including '2001: A Space Odyssey' with a robot character akin to HAL. I enjoyed it – highly thought provoking. However, for an opposing view, my wife thought it truly boring so I guess you'll either love it or hate it. The film won a 2010 BAFTA for Outstanding Debut – I agree, and it gets 5/5 stars from me.

Very Good But Not Great - Moon review by CP Customer

Moon is an enjoyable throwback to the era of 1970's science fiction, which was much more believable than the glamorous CGI inspired films of today. It is a strong debut from Duncan Jones who shows great promise with a limited budget. As the end of his three year Moon contract approaches, Sam Rockwell's character starts to see things and suspects other forces are at work within the base. Overall it is fairly predictable but running only for 93 minutes it gives you enough without overplaying the scenario. The soundtrack is the strongest aspect followed by the stark, crisp set designs.

Ok but could be better - Moon review by CP Customer

Alright i know every one has been raving about this film but here is my take: Its got great sets and looks vistually very good. The down side is the story. Its basically very simple gradually you figure out what is happending during the film then you sit waiting for a twist or for it to really take of and get interesting but it never happens. Feels like a bit of a let down at the end with me asking 'is that it' over all a solid 3 out of 5.

This film was just like watching paint dry. I try to watch it three times to see if I could get my head round it guess what I did not. If you can not sleep then try watching this film it had me sleeping with in 15 minute of me putting it on

Well i am very dissapointed, I did not get to watch this film as the copy I received had running commentary from the directors! I was really looking forward to watching it as it looks like a great film. I might re add it to my list again to see if I receive the actual film next time.

such promise, failed to deliver. - Moon review by CP Customer

sadly a bit of a mediocre sci-fi. Twists are revealed too early on and seem a bit too obvious. A very subtle performance from sam rockwell made the film watchable. Would have been a three star movie if not for an atrocious final 30seconds, really left a bitter taste in the mouth!

The entry in Cinema P gives Spacey as the first actor. I was hoping to get the full force of his acting, unfortunately just his voice as a robot. Sam Rockwell (Bell) plays pretty much the only actor in this film well. 97 minutes of 1 actor is impressively pulled off by virtue of his acting and a great plot. The first scene is the set up for the futuristic plot. It describes in documentary/news format why Sam's character is on the moon. I think it could have been incorporated into the plot more subtly. Similarly the last scene describing the outcome was a little unsubtle. The rest is claustrophobically in a space station with the slow development of Bell, the unravelling of plot and the interesting view of human nature in terms of massive commercial investment and dispensibilty of life. I wish Spacey and Rockwell castings had been swapped. The budget should have been a bit bigger but the story is very moving and refreshingly different.

quite boring - Moon review by AB

Albeit great with a single actor carrying the plot and scenes, the story was a tad confusing until the end, and even then not great.

A bit over-hyped but in the end watchable