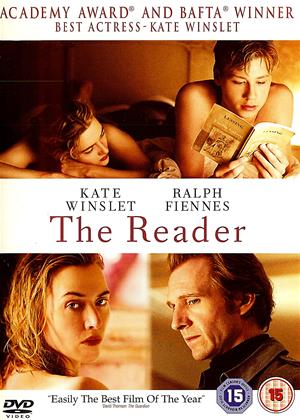 A first class cinematic experience - The Reader review by PT

This film will linger in your mind long after you have seen it. It is haunting and superbly acted by all the main stars. Irrespective of Hannah's (Winslet) past, I defy anyone not to feel sympathy for her. The scene when she and Fiennes meet after 20 odd years is so moving, watch the hands. Miss Winslet gives the performance of a lifetime, hugely worthy of her oscar for the role. A film I feel will be mentioned in the next publication of classic film books, like films you must see before you die etc.

With all the tremendous German films of late, it’s surprising that The Reader is predominately a British production, although Bruno Ganz features. The book upon which its based has been out since the mid-90’s and Hollywood’s fascination with the Nazi era as a library of source material continues. Kate Winslet goes through a wide range of emotions, ages and costumes, as she plays Hanna Schmitz, including a sizeable dose of bedroom action. I found it a similar epic role to that of Revolutionary Road. The main issue with The Reader is that it is far too safe, glossing over many issues (in spite of its long running time) and failing to land a knockout impact. In the hands of a more challenging director this would have been a more emotional and thought provoking film.

I was only following orders - The Reader review by CP Customer

A magnificent movie with a superb performance from kate winslet. Two very powerful feelings are very much to the fore - GUILT and LOVE. I found the film very moving and whilst there was a background of genocide I did feel a sense of sorrow in the end. A MUST WATCH.

The Peader - The Reader review by AM

Really good and unusual film, dealing with a very unusual premise - a former Nazi war criminal Winslet having a bit of how's your father with a schoolboy. It's remarkably romantic considering the circumstances, and Winslet gives a phenomenal performance as the poorly educated and emotionally crippled protagonist, for which she received an Oscar, rightly. Her young lover was played by David Kross - a relative newcomer at the time and should have won more accolades for. Fiennes also good although possibly underused. Bruno Ganz wonderful as Kross' Uni lecturer.

We didn't really get this one so watched it half way through and sent it back, but am sure lots of other people enjoyed it

Food for thought - The Reader review by CP Customer

From the beginning there is a urgency to this film that does not allow a minute for relaxation or reflection. The story progresses but not in an expected way and at times I found it very moving particularly as the young man approaches maturity.

This will keep you thinking for days,weeks or maybe even longer.

Impossible to believe in the character of Kate Winslet. The camera can't decide to show her beautiful or ugly, soft or dry, victim or torturer. Kate is lost and the viewer feels like on a drunken boat. Another cast would have given a totally different film. Better read the book.

The film's strength is the brilliant acting from Kate Winslet, Bruno Ganz and Ralph Fiennes -- along with excellent fast-moving direction.

The film's weakness is the total implausibility of the story for those people who have actually researched what happened in the final stages of the war, rather than just believing the Hollywood propaganda line. With the truth about Weinstein's totally corrupt nature having come to the surface, we don't need to automatically believe his political propaganda.

Moving - The Reader review by JS

Just watch "The Reader". I found this film very moving ,and also very Original.It really shows the kind of problems ,some people encountered after the war.

Outstanding - The Reader review by JD

An awesome performance by Kate Winslet and Bruno Ganz. The characters are not immediately likeable nor indeed obviously realistic. This unusual relationship is gripping as it develops and a powerful plot unfolds.