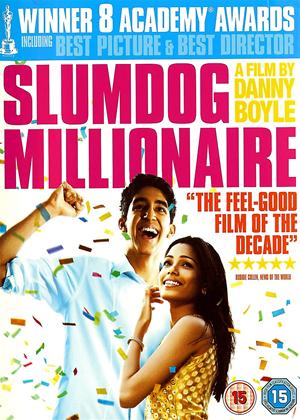 I'm afraid this didn't work for me. It took a very superficial approach to some serious issues such as child mutilation and exploitation. I couldn't see any comedic element to the film or any feel-good factor. In fact, I found the whole piece rather depressing.

Wrongly promoted as a feel good film, Slumdog Millionaire is a roller coaster of emotions ending in euphoria. It does set out with scenes of torture but these soon give way to wonderfully vibrant locations and unique events, which provide Jamal with those answers he’ll come to rely on later in life. While the ending is obvious, the actual thrill is the experience following Jamal and his brother, as they grow up on the streets, show an Alan Sugar style business sense, and mature differently. A toilet scene that rivals Trainspotting will have you laughing, whilst the call centre location will be familiar to most of us.

A cast of relative unknowns under the directorship of Danny Boyle produces one of the most memorable films of recent times. They even avoid the clichéd Bollywood dancing until the end credits. There really isn’t a chink in the colourful armour of Slumdog Millionaire, as everything delivers. The cinematography captures the essence of India, the soundtrack is modern yet influenced by the region and the script holds your attention throughout. Rental is a must!

An Absolutely beautiful and heart warming film. The band wagon, the hype everything is well deserved of this beautiful film, The acting the story the music is all perfect. definatly deserved of all the oscar glory.

An inexplicable multi-Oscar winner in 2009, this is one of the few films that blatantly gives away its climax even before you set foot in the cinema. Structured around the famous TV quiz show, the plot is constantly interrupted by lengthy flashbacks of the contestant's upbringing in the slums of Mumbai, as depicted by the usual rent-a-cute street urchins. Any tension is provided not by the narrative but by the audience-manipulating TV quiz itself, and we know how that’s going to end. Boyle directs with his customary verve, hence its two star rating, but a more realistic depiction of Indian life will be found in the tedious but more informative films of Satyajit Ray.

Matters are not helped by a lacklustre central performance. The only interesting characters are the morally ambiguous quizmaster and the detecting investigating cheating. It all ends in the expected rousing climax that you’d have to have a heart of stone not to vomit at. Oscars? All boxes are ticked. The Academy comes over all warm at the prospect of cloying sentimentality and political correctness, and it just loves a happy-clappy ending. Whoo! Whoo!

I had heard that the film had gratuitous violence which had put me off watching it at the cinema. I needn't have worried - it was a story of a hard life and a fairytale ending - from the title, the ending is obvious, but the story of how he got there is the clever part. If you enjoyed 'Lion' you'll love this.