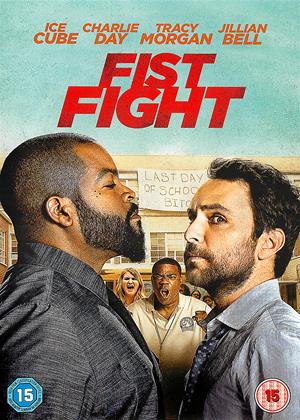 Ice Cube in a round hole - Fist Fight review by NC

Typical banal US film. Rapid dialogue signifying nothing, except swearing and offensive content. If US schools are really like this, then God help America. Ice Cube wasted in this one.

Fist Fight is yet another fearlessly low-brow comedy existing in the cynical circle of Todd Phillips comedy where any bit, no matter how mean or ill-thought, is acceptable for laughs. That much I expected from such a production, but I was not prepared for the more insulting aspect of the movie attempting to find some topical resolve for its scenario. The scenario in question is that of two teachers fighting each other after school. Not only does this movie attempt to amp up the fight as the highlight of the day for this depraved little town, but it attempts to justifies its importance as a means of building character and repairing the values of a school. Yeah, all that will happen with one throw-down in a parking lot. It didn’t work for rednecks outside a Walmart, but it will apparently work for the teachers of this cartoonish universe.

Charlie Day plays an English teacher that is despised by everyone in the school for being a wimp. Actually, despised would be the wrong the word. Most of the students and staff would delight in torturing him both physically, mentally and financially for their amusement. One teacher in particular played by Christina Hendricks would actually like to see him dead because she mistakenly believes him to be a pedophile. And I mean literally knife-in-the-gut dead, as is her only bit for the entire movie.

But what has Day done to deserve this? He seems to be a nice guy who wants to teach, has a daughter that loves him and an equally loving wife with a child on the way. But he’s a wimp so I guess it’s funny that everybody hates him. Oh, and it’s the last day of school which means senior pranks are abound for this pitiful teacher. No, pranks is not the right word. These acts involve destroying cars, breaking windows, drawing giant penises on the football field, throwing paint at teachers and dragging teachers down the halls via a horse that is high on meth.

And yet one of the most simple pranks of constantly turning a TV on and off during class is enough to set off the hot-head of an English teacher played by Ice Cube. Such disobedience angers him enough to go grab an ax and chop up the student’s desk. Seeing as how Day was a witness to such an incident, he rats out Cube for fear of losing his job. Infuriated that Day would snitch, Cube challenges him to a fight after school. And everyone in town catches wind of this fast and becomes generally interested in this fight. Cube insists that this fight is to prove how messed up the school is, but what about the rest of society that seems to encourage this behavior as well?

The comedic actors here are working with very little, falling back on the expected gags of their characters. Day spends the entire movie annoyingly screeching and stammering to stop the fight to the point where I expected him to go insane and light the school on fire. Cube is playing the same character he’s played in every movie, making it all the more depressing when the script forces him to spout lyrics from NWA because references. Jillian Bell plays the chubby teacher that wants to have sex with all her students, a mannerism that is somehow funny if it’s a woman, but appalling disgusting if it were a man. Tracy Morgan babbles as he always does, loudly muttering about how he’s from the streets and encouraging Day to be a man. Dean Norris can only scream and hope he’ll be intimidating as the principal. And I swear the filmmakers must think that Dennis Haysbert’s appearance alone must be funny as he has literally nothing funny to do in his one scene with one line.

Fist Fight is such a deplorable little comedy for both its downward punching and insulting resolve. The fight between Day and Cube is needlessly as brutal as the padded out road to get there. In the end, Day learns to be a man and the school receives more funding, all because of the fight. I’m sure this movie had the best of intentions to be a raunchy comedy, but it has one fatal flaw: This is Earth. This movie is so vile, hateful, mean, dim, juvenile and insulting that it would had to have been conceived on another planet. I want this movie sent into space so that we can finally discover which planet finds this type of comedy funny, poignant, topical and inspiring. Then blow that planet up.