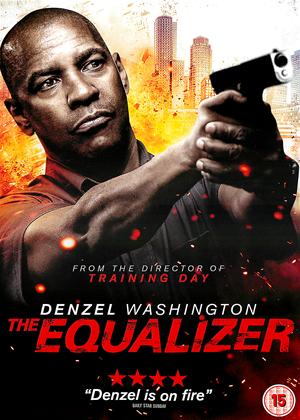 Reviews (6) of The Equalizer

Would Edward? - The Equalizer review by Schrödinger's Cake

I really wasn’t sure what to expect when I sat down to watch this, and consequently I ended up being pleasantly surprised. Although the script offers little new (hey, why bother writing original material, when you can recycle the old ad nauseam) both Denzel Washington and Chloë Grace Moretz put in performances that are enjoyable to watch.

Washington is perfect as the quiet, book-reading loner who turns into a merciless killing machine. Fast-paced narrative with enough introspection to keep from running out of control. No loud intrusive music. Not much profanity. Violence with style. 'Equalizer2' would be welcome.

It was ok - The Equalizer review by CP Customer

On the plus side very atmospheric and great acting from Denzil Wahington. It creeps along very slowly for the first 30 minutes and some viewers may give up through boredom. When it all kicks off, there is the usual action stuff. Sadly, Mr McCall (the equaliser) has no depth to his character so one is left with just another shoot em up flick. I seem to remember Edward Woodward played this role on tv back in the day - and the scripts then were far superior.

Being old enough to remember Edward Woodward, I was a little prepared to dislike this film. However, Denzel Washington is brilliant in the role. I thought he brought quite a reluctance and sadness into what he was doing, which really distinguished this film from the current crop of geriatric-revenge pap (eg the Taken series and the various copycats - we all hoped that genre had ended when poor old Charles Bronson turned up his toes). So, see it for Denzel's performance alone, if not for anything else.

I suppose it is every man's warrior fantasy to take on all the big bad nasties, and win in spectacular fashion. What makes these films succeed or not, for me, is whether or not I can relate to the central character. The hero must have a certain calm dignity honesty and integrity. They must have efficiency in martial arts but not on enjoyment of violence. The final ingredient is a just cause of some kind for the hero's Crusade. The final ingredient of the fantasy is usually a beautiful and adoring woman, or in this case mildly appreciative woman. This film certainly ticks all the boxes with a subtle script, and good acting without too much reliance on non-stop action. I have no idea how the film would appeal to women viewers: it would be interesting to read their views.

good thriller worth watching - The Equalizer review by gazmb

Very good thriller , well made and very well acted. He comes out of his self-imposed retirement and finds his desire for justice reawakened. He fights back against Russian gangsters to help a young girl he met that is caught up with the Russian gangsters and needs help to be free from them . Thats when the Equalizer steps in to help.

Denzel Washington is the quiet and mysterious lead in this dark action-thriller where a warehouse worker takes it upon himself to save the life and morality of a prostitute under the control of a violent Russian gangster.

With a slow burning tension and a well-built sense of anticipation The Equalizer takes it’s time to develop character and tone; Washington’s McCall, a man with an unknown past and an inability to sleep, is precise and careful in his everyday life, choosing to spend his sleepless nights reading from his vast collection of novels in a dinging all night diner and his days doing thankless manual labour. He choose his words, his clothes, even his food, with careful deliberation, keeps his apartment clean and sparsely decorated, everything about his presentation points to an outward calm that hides an inner – and probably violent – struggle. His encounter with the pretty but bruised Teri (Chloe Grace Moretz) forces him out of this unqualified retirement and into a world populated by violence, gunfire and thugs.

A dark and well-constructed feature the Equalizer was better than I expected it to be. It held my attention and I found Washington’s character far more intriguing and compelling than the majority of his heroic peers. I appreciated the time the film makers took to develop the character and the combined use of camera work and Denzel’s on screen performance to keep the central focus on the character rather than action throughout the runtime.

With a couple of similarly well played supporting characters, notably that of Teddy (Martin Csokas) the huge, tattooed and quietly spoken mafia boss who holds power over Teri, the Equalizer is driven by character far more than plot.

One of the better thrillers of recent years it’s nice to Washington return to the roles he does best, utilizing his deep and enigmatic eyes to draw the audience in and imbuing his character with the kind of real personality that is missing from most contemporary films in the genre.