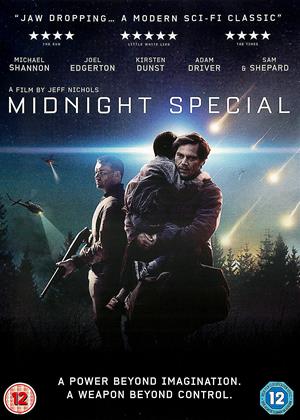 Another Under the Radar Hit - Midnight Special review by MD

I knew nothing about this film before renting it, but like a couple of other recent movies that received little or no attention from the multiplexes, it turned out to be far better than most of the blockbusters you see there.

The film starts slowly, and one major criticism I have is that it does tend to drag a bit in several places throughout the movie, but there is enough mystery and intrigue to keep you interested until the story really starts firing on all cylinders.

It is not a particularly original story, having antecedents in "Starman" and Spielberg's "ET" or "Close Encounters", but it is done from a new angle on the idea, and enough innovations and twists to make it seem fresh. The acting is virtually first rate from all concerned, not least the boy in the lead role, and there is a very satisfying cynicism from the director, who subtly critiques the way that religious sects and the US military would respond to an alien life form and anyone associated with it.

The fairly predictable ending is handled as well as could be expected, but by then you are kind of rooting for the underdog, as it were, and the final shot will certainly test you: only if you have really been paying attention will it make any sense.

My verdict: definitely worth a look if you want something rather different and more satisfying than most mainstream fare.

A silly tale given over-earnest treatment. With the help of his family a boy with mysterious powers – he can ‘think’ a satellite out of the sky – is on the run from the government. Something is about to happen, but what? The premise is intriguing and there’s enough incident to keep you watching, but the plot is all.

The deliberate pacing and mainly static medium close-up camerawork rob the few action scenes of any excitement. Too many scenes take place in darkness and shadow, further making for a dull watch. When we finally get an inkling of what’s going on after an hour, it’s all rather ridiculous and ultimately unsatisfying. It’s 80s Spielberg sci-fi without the flair.

Worth a watch.. - Midnight Special review by JJ

Enjoyed this move, has all I need in a film action, adventure, a good plot, story, great actors, worth watching yes..

This movie is a like a cross between ET, The Midwich Cuckoos (the original b + w film is the superior one), the Man who Fell to Earth and Superman (which gets referenced). Almost a messiah story metaphor really.

Anyway, the film starts so well - it does not give everything away so the viewer has to concentrate to work out what is going on, always a good sign. Act 2 keeps up the tension. The final act and ending however vanish into the usual swamp of cod-spiritual sci-fi sludge and CGI silliness common in Hollywood movies these days. Oh well.

Until then, I enjoyed it. Was 4 stars until then and the special effects are good if unintentionally funny at times. Never had swimming goggles seemed so glamorous!

However, the silly final act and ending reduced that to 3. I have seen worse scifi movies anyway, so worth a watch.

Not at all what I expected but Very Glad I chose it by the end . - Midnight Special review by porky

Unusual slant on a' Visitors from another place' kind of Movie, but actually something quite different. However I wasn't sure I had chosen the right movie at first.

From the beginning you are not at all sure it is Sci-fi at all. it seems instead like a rather macho Crime Drama / Kidnapping Thriller movie ,but the Sci-fi element grows as the movie goes on.

Tale slides through Police chases, Cult like Societies, FBI investigations , Terrorism, Murder , to finally get you to where it set out to take you with a rather Sad Outcome. Though not in any way you might think. Well worth a watch if you like Sci-fi, Drama,Police Chase Action, a little bit X Files. a little bit Road Movie . Think a Male Thelma and Louise with a UFO link and you are almost there ....but only 'ish'

This seems a cheaper budget movie, but has a good story, a child is kidnapped by his birth father, as a cult the range says 'adopted' him, the tense chase across the states by the authorities and the cult, though the effects were few and far between and it shows how small the budget was. The cast was good notably Kylo Ren actor and I think Kirstin Stuart. It was a solid story that could have been cut by half and hour, worth a try but I would put it on the foward button.

This is a weird film. It starts as if it is already part way through, with you wondering whether the way the two adults are behaving towards the child in their cafe is abuse of abduction. But it becomes clear he is a vulnerable child with weird unearthly powers.

It is convincing and compelling. Great stuff!

I thought the main actor, Alton, was great and the story was very involving. Definitely worth a watch. Although a little slow at times, the film slowly explains what's happening tto the boy and the ending is very satisfying.

A bit over-hyped but watchable - Midnight Special review by AB

A bit of the "only in America" scenario here - the religious cult, the over-zealous FBI, the 'odd' child but the film is actually quite watchable if only to find out what will happen at the end - which is quite interesting. My major quibble about the film is how much of it is filmed at night or in the dark, where it is nigh-on impossible to see what is going on with a minor observation that not enough is explained as to *what* the boy does to people. Watchable

Midnight special, albeit original in its premise and possibly its execution thereof, falls short of managing to excite audiences and becomes yet another piece of a poorly told Sci-Fi tale that sounds better when read on paper as opposed to watching its events unfold on the big screen.

When it comes to titles, movies often fall between two extremes: either not having enough connections to relate said title to the unraveling narrative, or their titles directly relate (in one form or another) to a certain plot point or character that are key to understanding the movies’ syuzhet. Midnight Special is part of neither, and both at the same time – its title may suggest irrelevancy to everything that’s going on, but it’s in fact subtly interwoven all throughout the main theme of the movie.

In American folk culture terms, “Midnight Special” is a song dating around the first half of the 20-th century. In it, a train called Midnight Special is asked to “shine light” upon the singer. Also, the train name corresponds with a real train covering track between Chicago and St. Louis – with one way station being Alton, Illinois. The connection at this point comes obvious as a rock hitting a lake’s surface: our main character’s name is Alton.

But, what does that have to do anything with the story?

For starters, kid Alton Meyer (played by Jaeden Lieberher) can propel concentrated beams of white light via his eyes. Anyone who looks him while he does so becomes mesmerized and loses all touch with reality during that little séance.

Furthermore, Alton possesses supernatural abilities to intercept all kinds of telecommunication, and as such becomes a great interest to all kinds of strange people – including those currently in power.

Without delving into great detail, it’s clear the boy is wanted, and it only becomes logical thus far. But, writer and director Jeff Nichols never cares to explain why this is true and at a point it becomes frustrating to have a constant stream of new plot points without any kind of relief.

Michael Shannon and Kirsten Dunst play Alton’s parents and do a decent enough job to portray their great care, and at the same time – failure to provide their son with a normal childhood as every kid ought to have. Lucas (played by Joel Edgerton) seems like it only exists to tag along in the whole ordeal without clearly developed traits and character motivations. NSA agent Paul Sevier (Adam Driver) gets to interact with Alton, but both characters seem confused both in the narrative and outside in real life as actors.

Perhaps Midnight Special’s redeeming qualities lay in the ideas hidden behind the clumsy writing and (at times) questionable direction it takes, but as it is – they are too convoluted for one to actually care about, let alone wholeheartedly recommend this movie experience.