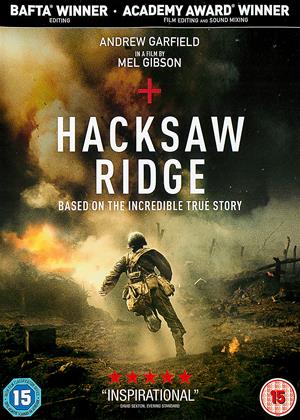 Desmond Doss must have been a remarkable man, but this is not a remarkable movie. The first half of the film is largely taken up with Doss's childhood, youth and a rather sentimental love story. This is followed by basic training in the U.S. army that seems like an abbreviated version of the first half of Full Metal Jacket. Mel Gibson is well known as a very conservative Catholic and treats Doss's conscientious objection with respect.

The second half of the film is mostly bloody war scenes which Gibson seems to relish filming. If you like dismemberment, disembowelment, spurting blood, and incineration by flamethrower, then this is definitely the movie for you. It is as though Gibson watched the action scenes in every war movie you have ever seen, and then tried to top them all. The action sequences in films like Full Metal Jacket and saving Private Ryan feel realistic (whether they actually are or not), but the sequences in this film felt way over-the-top.

Hacksaw Ridge has very high user ratings so clearly many people disagree with me.

Can't say it's a film you can sit down and enjoy a little over the top with the battle scenes, which i thought went on a bit to long...

Interesting story about a amazing man, but i think it could of be told better . Film average !

I agree with the review by RS. Critics seem to confuse this film with the heroics of its real-life hero Desmond Doss. As a film it starts well, with a well-observed vignette of small-town Americana, but after half an hour Desmond joins the army and it degenerates into a stereotypical war movie. The depiction of boot camp is like every war movie you’ve ever seen, with an unconvincing Vince Vaughan playing a shouty sergeant ridiculing the recruits.

The ensuing war scenes in the WW2 battle for the Pacific island of Okinawa are bloodily enhanced by cgi to ram home (i.e. revel in) the horror of war, but we have no emotional engagement with any of the characters.

Presumably Catholic director Mel Gibson was interested in the subject because of Desmond’s religious convictions, which stopped him carrying a gun. There’s a debate to be had there, but the war against fascism (evil?) would not have been won without guns. Apart from that angle there’s nothing new in this movie and nothing that’s not been done better many times before.

Great film with a huge amount of realism. Just amazed at this true story and what those guys went through.

I think this film stays with you for a while unlike so many Hollywood factory produced efforts.

I wasn’t really sure what to expect when this film started out. Mostly as I couldn’t remember ordering it (I think I’d selected it on a whim as part of a war film phase I was going through).

However, it quickly settled into Hollywood plot recipe #3 “underdog overcomes impossible hardships resulting in winning respect from fellow men”. Which is of course, a well-trodden path.

That said, this is still a good film, with moments of horror, laughter and empathic joy. There’s plenty worse that you could choose to watch!

Really enjoyed this film ,remarkable story based on true events. Must of been shocking for these people on both sides. What a remarkable strong willed man he was .

So much more than just a war film! - Hacksaw Ridge review by TB

A stunning movie but it's so much more than just one of the great war films. It's a true story about the love, commitment and faith of a genuine hero. Superb!!

This must be the most violent film I have ever seen. Well made with good sound qulity - I actually understood every word, which is unusual for me with American war films - but seriously over the top with the battle scenes.

I'm a woman and not a great war film fan but I found this film very watchable. I liked the balance of showing the character's personal life and beliefs alongside the intensity of the gruesome and very lifelike wartime action. I was amazed at what this guy achieved and made it for me one of the best watches for quite some time. Would recommend x

A film that at least begins to portray some of the horrors of war! - Hacksaw Ridge review by JB

This is not a fun film BUT it is a true one of a true hero. It isn't comfy viewing,some say the war bits go on too much,well nothing like what they put up with and hence it makes you feel uncomfy. As it should. This story needed telling and I am so glad it was made and so well. Fantastic film.

Desmond Doss should certainly be remembered as one of the most memorable soldiers of World War II, despite never once having fired a gun. He wanted to be a medic to help preserve life, not take it away, and it wasn’t an easy conviction to stick with in this war. His is a story that needs to be told and, in the hands of long-dormant director Mel Gibson, is told with the right amount of faith and shock. One could credit it towards his understanding Christianity or martyrdom he studied for The Passion of the Christ or his understanding of war through Braveheart. It’s clear where his skills lie.

The origins of Doss’ drive stems from both dark family conflict and genuine pluckiness. A near-death incident with his brother makes him take the Thou Shall Not Kill commandment more to heart. Frequent fights with his drunken veteran father wagging around a gun solidify his no-gun policy. But his ways seem fairly set by the time he reaches adulthood that he can be a chipper enough dork, as portrayed by a spirited Andrew Garfield. Despite war on the horizons, his fancies draw to nurse Dorothy, played with just as much warmth by Teresa Palmer. They make for a great couple and she serves as another drive for Doss’ entry into the military, despite her not being so warm to the idea at first.

The most objectionary to his enlisting is his father Tom, a former veteran played with grit and fury by Hugo Weaving in one of his best performances. Having seen combat before, he’s not as enthused to see his son go off to war, spending his days mourning the loss of his fellow soldiers. It’s a stinging pain that haunts him, breeding worry and frustration amid his alcoholism, turning him into a rather sympathetic figure.

Also providing an obstacle for Doss is his bitter military brethren. Vince Vaughn plays a tough drill Sergeant that cracks dry jokes through his humorless sneering, hoping Doss will quit if he can break his spirit. But even when faced with military prison, he still sticks to his convictions, Bible firmly in his pocket with a picture of Dorothy as a bookmark. The entire first half of the picture is devoted to his desire to do some good in the world, even when everyone else wants him to take lives.

By the second half, Doss is accepted and shipped off to Japan as a medic on the battlefield. To illustrate the ugliness of war, Gibson reserves a hefty portion of the picture for his Saving Private Ryan set piece. You know the one: scores of soldiers storm the battlefield as they are violently shot up and exploded with lots of blood and gore, in a scene portrayed as dark and gruesome as war should be. We don’t see much of the Japanese side, most of these soldiers hidden behind the fog of war, but the movie does spend time to make them a little human as when Doss saves a wounded Japanese soldier.

While Gibson certainly grasps the horrors of war and makes a grand point about its pointless grotesque nature, he loses sight of Doss during these scenes. There are a few moments where he grabs a few soldiers, distributes some morphine and runs them back to the evacuation point, but the camera is more interested in the gun-toting soldiers than Doss’ syringe-toting acts of saving lives. Objecting to using a gun, the movie will often forget about him so that we can watch his fellow soldiers storm the field plagued with active rifles, knives, grenades and machine guns. It’s still a meaningful exercise in showcasing what needs to be seen of a brutal war, but feels slightly too long for how much time we avoid Doss.

The third act is when Doss is allowed to show his true worth. The battle seemingly over after a retreat for the day, Doss sticks around all on his own to retrieve more soldiers, still alive on a battlefield crawling with Japanese soldiers. He prays to God to let him save one more, rushes another wounded soldier back and repeats the process. Many soldiers were able to live another day as this one medic put himself entirely on the line.

The real Desmond Doss held off for years on a film adaptation of his life, worried about the accuracy of his efforts. While Hacksaw Ridge still does take a few liberties here and there, its subject is portrayed with a great understanding of his character. It’s easy enough to relate to Doss’ moral convictions, religious faith and determined nature, with Andrew Garfield’s innocent and courageous performance. Gibson’s direction portrays his story with the right amount of shocking imagery and uplifting themes, violent without being sensational and inspiring without pandering. As a war film that makes a strong case for pacifism, it’s one of the most important war movies that asks the audience to think a little more about conflict than just who shoots who.