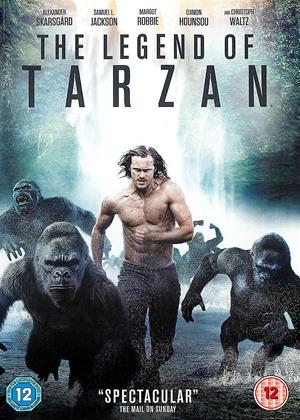 Reviews (5) of The Legend of Tarzan

Politically correct remake which looks like a computer game (too much CGI!) - The Legend of Tarzan review by PV

First of all, I'd like to say that this movie is not awful - it has a stellar cast including Jim Broadbent and Simon Russell Beale. It has some great lines - and the usual goodie/baddie character arc progression.

It is achingly politically correct though and is historically a mess.

The fact is that 1) the USA banned slavery decades later than Great Britain and it was the British and the pressure from ordinary British people who exposed the scandal in the Congo; 2) native Africans are not all lovely cuddly people - they had and have a thriving slave trade, kill local wildlife and are massively corrupt (it is native Africans who have destroyed Congo, NOT nasty whities from Europe).

Some very silly animal fights with Tarzan made me laugh actually. And the CGI is so annoying - it's basically a computer game and with those awful delayed action shots that are popular in far eastern cinema (which is where the film-makers aim to market this - maybe that's why there is no reference to the way China is raping Africa with its greed and corruption? It is the Chinese making elephants extinct because of their greed and hunger for ivory - white Europeans actually managed farming and wildlife well in Africa and the British were not corrupt, unlike all African leaders).

A far better film is GREYSTOKE from 1983 and the best of all are the old black and white Tarzan films from the 1930s and 40s starring Johnny Weissmuller who will always be Tarzan to me.

Time-passer - The Legend of Tarzan review by Alphaville

Another Tarzan film? Why? More cgi apes? Why? They reckon they’re doing something different here by introducing an anti-slavery and anti-ivory poaching message into the plot, but it’s still the same old swinging through trees and love-ins with cgi animals.

There are good things in it. The story attempts to be different by beginning with Lord Greystoke (Tarzan) returning to the jungle rather than growing up in it, but we still get multiple flashbacks to that anyway. Alexander Skarsgard brings a refreshing poise to the title role. Christoph Waltz, as always, makes a suave baddie. The Gabon landscape is sweepingly captured. On the minus side, the action is confusingly edited and the bog-standard orchestral score irritatingly underlines every single beat.

It’s not a bad film, it’s just that we’ve seen it so many times before.

With many films coming out from Hollywood being overhyped, badly written, poor acting and awful (not so) special effects. It's refreshing to see an action movie that doesn't take itself too seriously, gives you lots of action and is an enjoyable romp! Whilst there is nothing new here and the script isn't deep nor meaningful, this is simply a great action packed family adventure, which had us on the edge of the seat mots of the way through! The close up scenes with the animals are superb and extremely well done. All in we found this to be a very enjoyable and highly watchable action packed adventure!

I enjoyed this movie but did find myself looking at my phone part way through so it wasn't that captivating even with Mr Skarsgard's bare chest on display! I found the Samuel Jackson character rather annoying and there was one line he said towards the end of the movie that made me want to throw something at the screen!

Ok film - The Legend of Tarzan review by CP Customer

I was looking forward to this film but I struggled a lot to stay interested in it, can't put my finger on why just for me found it a bit muddled and not really interesting.

The Legend of Tarzan, despite its seemingly darker tone for a modern era, is a purely pulp piece of filmmaking. It’d have to be for such material of a man swinging through vines in the jungle and battling with apes. There’s an attempt to make this Tarzan a little more subtle, but it only goes so far as actually giving the man of the jungle some pants. After all, the hero deserves a little bit of dignity.

The hero is introduced as John Clayton (a muscular Alexander Skarsgård), now civilized in the English world with his vine-swinging days behind him and settling down with his wife Jane (Margot Robbie). Donning a suit as his true name becomes a myth, he’s called out of retirement to resolve an incident in the Congo with the traditionally evil Captain Rom, played with some chipper smugness by Christoph Waltz. Aided by Civil War veteran George Williams (Samuel L. Jackson in comic relief mode), it isn’t long before John finds himself back in his element. He scales trees, faces off against apes, communicates with the animals, catches up with old tribal friends and sets off another adventure to save Jane and stop the villain.

There’s nothing inherently deep about Tarzan’s lore, but the movie attempts to dig some emotion out of this light story. John’s memories of the jungle conjure up some striking imagery of his unique childhood among apes. His hands still bear the bone structure and scars of a man who could climb just about anything, a display that entices local children to learn more about him. The romance between Tarzan and Jane has some amount of passion in their tender embraces and nights of embrace. It’s not as effective as it should be, but at least there is something more to their relationship than just “him Tarzan, she Jane”.

For the most part, however, this is by-the-book action-adventure territory with all the expected bells and whistles. Alexander Skarsgård swings from tree to massive tree with grace, beats down gorillas and punches out an entire train car of goons. Margot Robbie savors a few moments of outwitting the villain in between her fragile sensibilities as a damsel. Samuel L. Jackson plays to the audience as the snappy sidekick that always has an expletive or a joke to cap a scene. Christoph Waltz does his usual sneering and cackling, but not at his fullest of potential in a picture where he seems to have been given just enough tranquilizers to calm down. And there are plenty of CGI jungle animals roaming around the Congo to make for some grand scenes of chases and chaos. The animals appear decent in most scenes, but the effects teams were a little too confident in a 3D showcase the scene that features a close-up of an ostrich nipping at the screen.

The Legend of Tarzan mostly fulfills its adventure promise and little more. It’s well paced, has some fun action scenes and just enough wit to overlook some of the more timid performances. This is more-or-less a return to Tarzan’s classic appeal as opposed to a more modern revisioning of the cartoonish vision of the Congo. There’s not much to this Tarzan, but maybe there never was as many rationalize that his character is a relic of the past. Perhaps so, but I can’t fault it for showcasing what made Tarzan so appealing in the first place, scars and all.