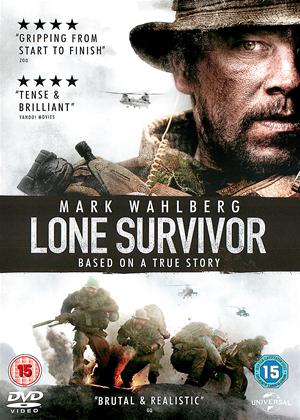 I think Lone Survivor is up there with Black Hawk Dawn as a window into real warfare but lacks that films pace & character development. It also cannot help itself by laying on the 'American Hero' aspect which by the end really detracts from the film's central relationship between the soldiers. The acting is very good but there is little or no back story to make you care about the soldiers, a shame when they are based on real people doing their job in the most extreme circumstances.

A worthy story about some selfless and frankly incredible men, let down by the irresistible urge to Hollywoodise and ramp up the macho factor to the highest level possible.

Watch this movie and you will be impacted by how powerful it is and how frightening the reality of war is .

Brilliantly directed and realistic and permeated by sadness .

Peter Berg’s war film is a mixed bag as it seems to be searching for awards praise without the kind of directorial skill required to pull it off. In fact the film is filled with some excellent performances, some killer action sequences and a wealth of tension but Berg’s obsession with the emotional moments seems to ruin the films carefully crafted tone as he crams them full of cheesy one liners and predictable character moments.

The film follows the four man team that tried to take out a dangerous Taliban leader and found themselves facing a war against enemies unknown as they try to escape the situation they have found themselves in.

The film opens much like Ridley Scott’s Black Hawk Down with the moments of tranquility, the bonding moments between brothers that are to be expected but it crams more comedy into the opening as when the fighting really kicks off there is little to no time for any types of levity. The film's opening moments ramp up the tension without you even realising it so that when things hit the fan you genuinely care about the fates of these macho men.

Mark Wahlberg, Taylor Kitsch and Emile Hirsch give excellent performances as three of the men but Ben Foster unfortunately makes the final member of the team a cartoonish killer, a poor imitation of Barry Pepper in Saving Private Ryan. Kitsch however makes an excellent team leader, a strong presence full of empathy for those around him.

Berg however proves he isn’t up to the challenges of this true story, the difficult aspects of this tale turn into stereotypical American grandstanding as each member of the squad has their own signature moment with slow motion aplenty. The whole film is crafted to emphasise the true nature of the story, the impressive amount of pain these men endured to take on the forces that besieged them but Berg manipulates the facts to make this tale one of extreme pity, something I couldn’t be any less interested in