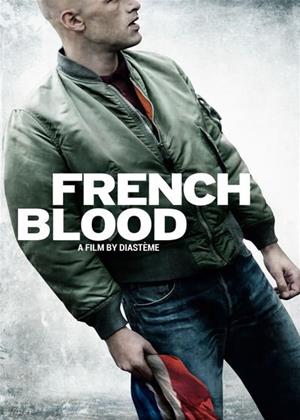 Synopsis:
Three skinheads are pursuing a bunch of Nanterre students squatting in a field, screaming that France has no room for fags or reds. They beat one of them with a studded belt and kick him in the stomach. Pleased with themselves, they humiliate a passer-by who has accidentally knocked into one of them, and then, smirking, enter a café determined to cause trouble, threatening the barman with a meat cleaver while harassing a group of elderly Arabs. All in all a good afternoon for the brotherhood. Although we will follow Braguette (Samuel Jouy), Grand-Guy (Paul Hamy), and Marvin (Olivier Chenille) over the next three decades, the main character is Marco played to perfection by Alban Lenoir.
Whatever reservations they might have had about the film, all reviewers agreed about his remarkable performance and the supporting cast is just as good. Marco resents his life, his alcoholic father and helpless mother, and finds refuge in his gang of neo-Nazis. He will remain loyal to them, or at least two of them, bound by a friendship that transcends political alignment. The year is 1985, the Socialists are in power (although losing support), and Jean-Marie Le Pen's far right party, the Front national, is emerging as a political contender, winning several local elections and sending deputies to the European Parliament. Skinheads of various stripe, including neo-Nazis, oscillate between support of the party and extra-parliamentary violence, viewing the latter as a legitimate political tool, as had their predecessors in the 1930s. Skinhead gangs were small, divided into feuding clans, and made little political impact aside from forcing the Front national to dissociate themselves from them.
Actors:
Alban Lenoir, Samuel Jouy, Paul Hamy, Olivier Chenille, Jeanne Rosa, Patrick Pineau, Lucie Debay, Renaud Lebas, Blandine Pélissier, Alex Martin, Michaël Troude, Gary Gillet, Andy Gillet, Frédéric Andrau, Franck M'Bouéké, Julien Honoré, Andréa Brusque, Benjamin Gauthier, Farid Larbi, Vincent Heneine
Directors:
Diastème
Producers:
Marielle Duigou, Philippe Lioret
Writers:
Diastème
Aka:
Un Français
Genres:
Drama
Countries:
France, Drama

Not released
Making Plans for Lena

Not released
A French Village

Not released
The Harem of Madame Osmane

Not released
On My Way

Not released
Far from Men

Not released
Love Without Pity

Not released
Declaration of War